A week ago I wrote about Tiwonge Chimbalanga and Steven Monjeza who live in Malawi- an African Nation.
They had been thrown in a jail in Malawi for 14 years.
Their crime was L O V E.

Tiwonge-33-and Steven-26, are a Gay couple living in their country of Malawi where being a Homosexual is illegal. 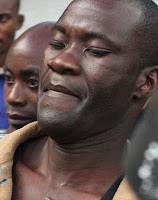 Imagine for a moment what it would be like living in a country where having blue eyes was considered illegal. If you declared that your eyes were blue and people saw you had blue eyes you could be thrown in jail. If you didn’t want people to see who you really were- a person with blue eyes, you hid constantly. Probably behind a pair of sunglasses.

Same thing for Tiwonge and Steven. They just happened to Gay. I am thinking they probably didn’t have blue eyes. If you didn’t read my blog about them, here’s a bit of background.
They were arrested in late December after they had announced their engagement as a couple which is against the law in Malawi, as I said.

The story found its way to the front page of a local newspaper. Instead of a long, happy life together, they faced 14 years of hard labour in a Malawi Prison.

They were charged, handcuffed, chained and taken from a court to a jail to begin serving their 14 years. I guess the judicial system thought the hard labour would work the “Gayness” out of them.
I would argue that except for the hard labour and being confined behind prison walls, being locked up with all those men would be something akin to one huge “Gay Bar!”
What was that judge thinking?
To be real cruel he should have locked them up with the womenfolk- especially “the Dykes”. That could have scared them “straight”!
As they were taken away outside the courtroom onlookers yelled things like:
“You got what you deserve”.

A week later the President of the Malaawi gave them a pardon. He made a speech upon their release saying- just to be clear, there really wasn’t a Santa Claus and being Gay is still wrong- and illegal. I would hope he came to the decision on his own but he was likely pressured by various governments, the Easter Bunny and concerned individuals around the world.

Friends who met them upon their release Saturday night feared for their safety and were looking for a “safe house” for Tiwonge and Steven to stay.
Maybe Canada could offer asylum.
Let them start over.
Let them be themselves here in the “true north strong- and free”.
I know Tiwonge and Steven are not Canadians but what a nice gift for Canada Day to the country and the world. It would be a wonderful gesture for all political parties in Ottawa to get together and make a dream come true?

Perhaps the Toronto Pride Committee will bring them to Toronto to be in the 30th Annual Pride Parade on July 4th.

I’m clicking my heels together “three” times and wishing it so.
Maybe you could click your heels together and make a wish too!
Auntie Em would be so proud of us all.
Posted by Rob Reid at 9:07 PM