March so far has been busy and very stressful.
Selling, buying, getting our ducks in a row.
No one ever said it was going to be easy moving three time zones away onto an Island!

As I have written before in this blog space, my husband Tom and I are pulling up roots and planting them down again in the Cowitchan Valley on Vancouver Island. This will all happen in mid-summer. Maybe a tad earlier. It all depends when our new house is ready.

We are both excited at the prospect of living in a "Maritime, Mediterranean Climate" with warmer winters. Cowitchan means "warm land". It also means Palm Trees, Yuccas and Monkey Trees.
Most importantly- no snow!
Well, very little at the least. If there is a dusting it disappears in a few hours or sooner. One could just stay inside, pull the blinds and ignore it, although, this year was a strange year for "Islanders". We were told it was the most snow on Vancouver Island in 60-70 years. It didn't stay long but it wasn't easy to get around. Some places have only one snowplow -and it's shared with another community! Other spots like Salt Spring Island- so I am told, have no plow. It's an Island thing! Neither are they prepared for it and at the least, able to drive in it. The only folks on the roads are transplanted Ontarians who are used to carrying on as normal through the white stuff.

I am looking ahead to gardening- West Coast Style. I plan on having three Trachycarpus fortunei. That's Palm Trees for us easterners. Actually, there are four varieties growing there. All hardy and they seem to handle occasional cold weather quite well. We might refer to them as date palms in Ontario and usually they stay indoors except for a summer on the patio. I have been checking out nurseries and a 6 foot palm could cost me up to $450. I love palms- always have.

I hope to also add some Yuccas. There are three Yucca Filamentosa's at our front steps and they have been there for 25 years. So, if they perform well here in Ontario, they'll be just fine on the Island. Rhododendrons grow like trees and I plan on putting in a few. Tom is digging up some of his Daylilies come summer and will transplant them to The Cowitchan. Our Tropical Brugmansia which grows dozens of yellow, flute-shaped flowers during the summer, will also find a new home in the Valley. Not sure if they can stay in the ground over "winter" but if not, we have plenty of storage in our full basement. Both of us are looking forward to a new kind of year-round gardening.
By the way, lawns grown all year long so it will be strange cutting the grass in January/February.

Our new home that we intend to call "Palm Villa" is a custom design with 2500 square feet of living space and a garage and a 1/4. We'll only have one vehicle in Duncan, so we can get by without having a 2 car garage. A storage/mechanical room in the basement affords lots of extra storage. We are on a corner property like our Pine Tree House here in Orillia, only in Duncan, the street runs down the south side of the house and not the north like we have now.

Here in Orillia, Ontario it's just a waiting game now. Waiting for the basement to be dug in Duncan and eventually the walls and roof. One has to really keep on top of things when you are building a house more than half a country away and we are learning something every day.
Posted by Rob Reid at 10:58 AM

Who the Hell picks those best movie nominations at the Oscars??

Although I am not that thrilled with Oscar's picks for movies, this year I made a point to watch every film- at least those I could finish. So, here's a quick rundown of those I watched before and after the Academy Awards and a couple that should have been nominated....and yes, I know the Oscars were last Sunday! It's taken me a few extra nights to see all the films- thanks to Stremio and Popcorn time.

La La Land
A couple of nice dancing scenes and some terrific jazz but I don't see what all the hype was about.
A good film but others were better. At the very east I hope this movie encourages other musicals to be made like in the "good old days".

Hacksaw Ridge
Tough to watch. Gritty. Blood. Body Parts. I thought it being an AMERICAN war movie it would take best film. If you can stomach all of the above, it's worth watching for Andrew Garfield. An American born actor who was brought up in the UK.

Allied
Another WWII film about Canadian Intelligence Officer Max Vatan (Brad Pitt) who meets a French Resistance fighter Marianne Beausejour (Marion Cotillard ) in 1942 Africa. This film should have had some nominations. Far superior to the slow moving, unmemorable Manchester by The Sea.

Manchester By the Sea.
It took me two tries to get through this piece of drivel. That was Casey Affleck's acting ability?
Yikes! I only finished the film the night after the Oscars because I wanted to see why he won the Best Aator category. I still don't know why he won with Denzel Washington in the pack of nominees, which leads me to-

Fences
A great film version of the stage play. You can always tell a movie version of a Broadway play because it looks like and sounds like a stage play. It is worth watching and no wonder Viola Davis won an Oscar. It should have been Best Actress- not supporting. Oh and to all those naysayers who have told me over the years that one cannot direct a show and be a part of the cast, I still say "poppycock"!! Denzel directed and starred in this movie. He is not very likeable but there are strong performances from Mr. Washington as well as the entire cast- Russell Hornsby and Jovan Adepo too.

Hidden Figures
This probably should have won best picture and all three leading ladies their own Oscar but there are only so many to go around. Good on NASA for this true story. You saw one of the "real" characters on stage during the Oscars. It would have been tough to choose between this movie and Moonlight- but they did. 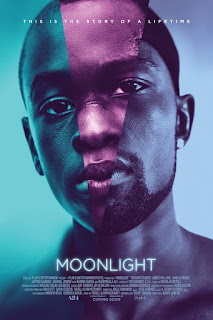 Moonlight
A coming of age, "Hey- I think I'm Gay Movie" with the lead character played by three actors over the course of 20 years or so. Fine performances. A gritty story and deserving of the Best Movie win. I still can't believe this film achieved those kind of accolades from that kind of academy.

Come Hell or High Water
Is still haven't finished this good old boy, Texas sheriff piece of ~ahem~ crap. It just wears on you and is one good reason never to visit Texas again. I was in Texas for 3 1/2 weeks a few years ago and let me just say that Texas has some wonderful vistas but get away from the cities and it's a different word. Being Gay there is not such a good idea either. Oh, you know that everyone carries a gun in Texas- right?

Lion
What a great motion picture...if you can make it through the first 45 minutes. It took two tries for me what with the subtitles in the first part of the film but Dev Patel had me in tears by the end. Nicole Kidman is in this film too- as if that matters. Doesn't she always plays Nicole Kidman whereas Meryl Streep never plays Meryl Streep?

Moana (not Nominated for best movie)
A Disney animated film. It has great colour and clarity in high def and Dwayne Johnson's song "You're Welcome" is cute but after a while I lost interest and did the dinner dishes.

Arrival
The Canadian Movie that anyone who lives in Quebec would never refer to as a "Canadian Movie" but as a Quebecois Film. It stars mostly Americans of course and has some nice bits about Aliens. Worth seeing and dreaming about, however, I would prefer my Aliens to look more like Dwayne Johnson in a speedo. ~grin~

Passengers (not nominated for best movie)
500 passengers and crew in hibernation for 120 years heading for a new planet. Three wake up 90 years before landing. Uh-Oh...
Some neat stuff- especially the bionic bartender. There should have been a category for "Best Ass" cheeks. Christ Pratt would have won "ass" down.