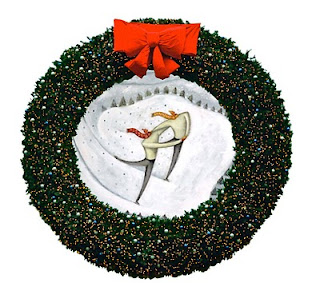 Ohm, Boo Hoo Hoo.
America got "trumped".
I figured it would happen. I watched it happen here in Canada when Harper won big.
Grow up America!
You've got muscle.
You've got power.
You've got Hollywood.
You've got our "Will"- Eric MCormack I mean...and
You've got a plethora of memorials to sob over from Pearl Harbour to The Trade Centre.
This is just one more disaster.

So what if your country is being lead by a right-wing, racist, bimbo millionaire. At least, that's what I hear and believe me I don't read or watch that much associated with your magnificent country, so there must be some credence there from what I say because I pay such little attention. Besides, you people have gotten rid of Presidents before- haven't you? Or in some cases- attempted to. It right there in your history books.
I say "your" because you all tend to paint the world's history with your own brush. Give it an American spin if you will.
Now, I am not suggesting that something might happen but you have to be the first to admit with all the guns in your country it's not exactly off the list of improbabilities now- is it?

As I was saying, up here in Canada we had his royal dictatorship Mr. Harper for 10 years before our "Saviour" Justin Trudeau came along- handsome devil that he is. Fortunately for us he has a brain as well. You didn't hear us whining and crying and saying "Oh woe is us!" when we had to endure Harper's right-wing kingdom.
Okay, we did whine a bit but we still have a Queen to pledge our allegiance to so hah-hah to that one.

My advice kids?
Pull up your big boy panties and get on with it already.
I don't know Ms. Clinton or really anything about her except for the fact her husband in his "randy" elected years spewed sperm on an office gal.
Who knows?
Maybe sperm is thicker than water and people just can't forget about that tainted, painted rose and the painted and tainted "Mrs."
I mean honestly? Are you like me?
Every time I see a photo of Mr.s Clinton I think of that sperm stain- and it wasn't even her little dark dress. It was some strumpet's-wasn't it?

Maybe you'll all feel better about "Thumper" once he's hosted Saturday Night Live a few times or sends all the blacks back to Africa or the Mexicans to Canada. I mean really, the Mexicans don't want to go home to Mexico. That'll all happen before he builds the walls of course.

Did you know we have Mexicans in our area? They work the huge produce farms just east of Orillia  along Lake Simcoe's shoreline. They also work the fields of Holland Marsh to the south of us too. These hard-working folks can be seen strolling along Mississaga Street- our main street, on summer nights. A chance to leave the fields behind and come into town to have some fun.

So, that's about all I got for you. I don't really pay much attention to US Politics that would allow me to expand on what I've written here.
WTF you say?
"Yes", I say, I can still live in Canada and ignore your news and sports and political goings-on, if I choose to. Any Canadian can but some of us just get caught up in all your nonsense, just like the rest of the world.

Honestly, I can't wait for our PM Justin Trudeau to send an invite to Trump for a State Visit. By that time her Royal Maj- Liz, will probably get around to doing it too. I think she's just waiting for Justin to go first!