Over the river and through the woods,
To Grandma's House we go...

or is it? Grandma's I mean.

M. Night Shyamalan's movie- The Visit, is about just that. Grandma's House and Grampa's too.
Cripes.
It's a goodie. It was released last year about this time

I always enjoyed going to my Grandma's House back in the 50's and 60's. It was a white stucco, two-storey home right next to Davey Park's barn. Sounds like it was in the country but it wasn't. It was right in Orillia where the Thor Motor's Service Department now stands. The house was bulldozed down- and the memories along with it, about 3 years ago.

Going to Grandma Reid's for Thanksgiving, Christmas and a assortment of other special occasions was a big deal. Not so much with the kiddies in "the Visit" who leave home to stay with their Grandparents for the first time- sight unseen, while Mommy buggers off for a week on a cruise with the new boyfriend. The kids video the whole experience.

The house is set in the pastoral countryside. A real charmer both inside and out. It's what happens inside and out that makes this M Night movie such a creepy thriller. Oh there are a couple of laughs too but when the unexpected happens look out. Grab your chair's arms and hold on for the ride.

You shouldn't be surprized at the tension in The Visit. It is M. Night Shyamalan after all.
Creepy.
I thought I had the movie figured out.
I didn't.

We watched it at home on our big-screen. I thought it would be safe.
Comforting.
Nope.
I jumped about three times and my heart beat faster than a turkey's arse at fly-time.

It warmed me up for the Hallowe'en season I suppose.
I can't say too much because I will give the creepiness away and you should experience it on your own. I will say there are several bits when a hand-held camera gets to be a bit of a bumpy ride and because of my inner ear imbalance, I have to look away. I should make you aware of that. No need to get motion-sick watching a movie that is meant to scare you not sicken you.

For the most part you won't really recognize the actors in the movie. Makes it more real I suppose.

So children, stay out of sheds where creepy old Grandfathers go.
Don't crawl under your Grandma's house.
Keep your bedroom door locked after 930 pm.
Follow these rules and you'll be fine. 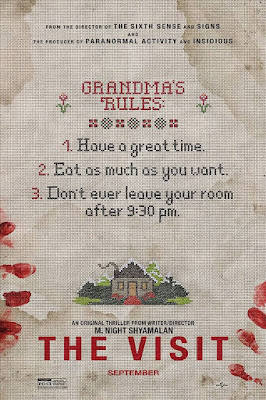 I've been busy the past few days.

I should say we.
My retired husband and myself have begun to de-clutter and purge- again.
From the house.
From the garage.
From the garden shed.
Oh and in the midst of all this purging and renewal I had to take my new Samsung Notebook 7 phone back to Best Buy- seeing that it had the capability of not only writing on the screen but blowing up and setting itself and our house on fire when in the charging mode.
I have another Samsung now. So we are safe. Friends were calling, warning me of the imminent danger of my Notebook phone.
How nice!
This time I have the Samsung Edge 7. Almost the same as the Note 7- without the explosions- but I have to write on plain old paper with a plain old pen instead of on a mobile screen.
Technology, eh?

Hennaway, back to purging and renewal, we put a bunch of stuff to the curb and a lot of it has been picked up for free by those who are hoarders. I had to move off the front veranda to the side veranda because I was making the punters nervous wondering. I guess my face was saying- "So, that's the kind of people that pick up another person's junk and take it home".
For free mind you.

We have a loft in our garage and once emptied, we had so much stuff it covered the garage floor and spilled out onto the deck.
Amazing.
There is still two Christmas trees in boxes, toilet paper and paper towels from Costco and a couple of bins of Hallowe'en decorations up top but I managed to use the shop vac and vacuum the rug and the bare floor up there. That's the first time I have vacuumed the floor in the loft. You know,  I think there was less dust there than what I see on tables and TV screens in the house in a normal week.
Dunno why but that's what it seemed like hennaway.

There are a dozen bags of clothes and comforters and stuff from past theatrical shows that are all stuffed into clear lawn bags and packed into the van. A trip to Value Village will soon rid us of those.

I have gone through a bunch of CD's and I have one more cabinet to go. I am however, still clinging to a stack of albums that I just haven't been able to rid myself of yet. Perhaps another day. Some of this purging it hard because the items being purged hold a bunch of memories. For instance, there is my Zenith Allegro Tuned Port speakers I bought- on time, from West End Radio back in 1972.
I loved to listen to CKFM 99.9- The Sound of Our Toronto on those speakers. The base was amazing and so was that radio station.
~heavy sigh here~

So, I thought I would update you on what is happening in my life right now.
Purging and dreams of moving to Vancouver Island- Parksville to be exact. More of Parksville and getting away from Central Ontario winters in another blog. Right now I have that stack of CD's to go through...