Sadie Flynn Comes to Big Oak has had it's closing night at the newly renovated St Paul's Centre in Orillia and now this fellah is done.
I bid a fond farewell to Orillia Theatre.
Double R Productions will continue for my Online stations Swisssh and Starlite- but not for theatre.

Why I am "retiring" from theatre?
Cripes, I could make a list.
Money, gossip, backstabbing, Divas, Diva -Dons, little support, few bums in seats...
I could go on and on but why?

I did a bunch of shows over the past decade or more and now it's time to bring down the curtain.
$27 dollars was our ticket price this season for both "All for Nun...The 2nd Coming" and Norm Foster's "Sadie Flynn Comes to Big Oak" and yet it was a tough sell. Cheaper for groups.

We took All for Nun...The 2nd Coming to Beaverton as well as Orillia. The Beaverton shows did us in revenue-wise. We barely made what one bus tour would have given us. My Husband Tom and I are in the hole several thousand dollars. That comes from our own pockets and being retired that comes off the top of our fixed income. Not to worry, all our theatre bills will be paid but at a cost.

Advertising tanked- both on radio and in Newspapers. It cost us plenty but it didn't give us the return we expected. For a small not-for-profit theatre company who donated to non-profits, we spent a bunch. I could count on one hand the sales radio brought and the newspapers maybe- maybe, a dozen ticket sales.

Now with another summer theatre company moving in to our former space next summer, I knew it was time to quit.

No tears.
I do feel defeated however. The support in the community just wasn't there. Now, someone else can worry about getting the "bums" in the theatre.
I am through.

A big thanks to the casts and crews and the volunteers and the freebees we got from local media over the years. It was a valiant effort. Sometimes we won. Sometimes we lost.
This time...we lost.

So, with a stiff upper lip I am looking forward to spending more time with my radio stations Swisssh and Starlite and of course there's Christmas coming and travelling a bit. I gotta get back to Paris. It's been a couple of years. London's Oxford Street and Christmas Shopping is calling me as well as the quaint Christmas Market of Mainz in Germany.

I'll still be writing here on my Rob Blog. Not to worry.

Hennaway, I just thought I would let you know what's up and now as the lights dim and the curtain falls, I bid Orillia Theatre adieu.

Busy. Busy. Busy.
Did I mention that I am busy?
It's October and our final Orillia Theatre show of this 2016 season is in production.
Rehearsals now and then our show- Norm Foster's "Sadie Flynn Comes to Big Oak" opens October 27th at the newly renovated St. Paul's Centre in Downtown Orillia.
This is exciting- partly because of this new space created by St Paul's. Double R Productions/Orillia Theatre will be the first "theatrical group" to use the new stage and space- and as Orson Hubble in "Sadie Flynn" would say- "It's big, right?"
Sure is.
Huge stage and a big, cavernous hall to fill.
Yikes!
We could put up to 400 bums in seats.
Now, that won't happen unless there's a miracle but we are hoping for a hundred or so at each of our six performances.
The cast comes includes Jim Dwyer, Gayle Carlyle, Teal Cochrane, Laurie Herd and yours truly. The cast comes from near and far- Huntsville, Bracebridge, Washago and of course Orillia.
Tom Ruechel is our Stage Manager and is assisted by Michael Abernethy, who you might remember from our fall show in 2015- The Importance of Being Earnest.
That show was performed at St. Paul's too, only in the "old" space.
So, if you are reading this and are close to or in the City of Orillia, come see our show and support our not for Profit Theatre Company- and St. Paul's Centre.
Opening Night October 27th we donate part of our door receipts to Green Haven Shelter. Friday Night the Cast & Crew is raising funds for "Dress for the Cause" (Breast Cancer).
Saturday night we offer our audience prizes for Best Costume- if they come in costume that is.
That should be a fun night preceding Hallowe'en on Monday.
Come and see the show and have dinner on Thursday October 27th and Saturday October 29th.
Our Lunch and Show is Friday October 28th at 2pm.
Our Box Office can be reached at 705.242.4092
Come and see Sadie Flynn. We'll be waiting for you! 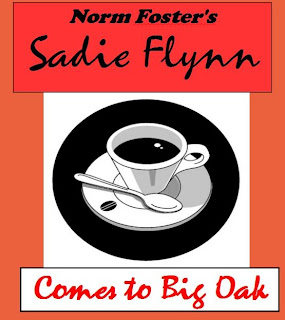