Where did May go? June's on the downswing now. I saw a poster in a shop window the other day advertising Canada Day in Orillia.
Geesh. Time flies when you're busy....and I am busy.
The first show in our Theatre Orillia/Double R Productions 2015 Season is hitting the boards.
The Affections of May runs through July 3.

A professional show that went from read-thru to dress rehearsal in 11 days! Actors, Stage Crew and Director have to be on their toes. There's no time for slouching or falling behind. Sets are built. Lights are hung. Dialogue is memorized and costumes are fitted all in less than two weeks.
Yikes!!

We have a spectacular Norm Foster product- The Affections of May. Funny, heart-warming and just plain Norm Foster silliness. It's the perfect show for a summer afternoon- especially if it's raining, or a summer evening out. We suggest dinner first- then the show.

This show is at the OCC- formerly Cinema 4 in downtown Orillia, as is the next show All for Nun. 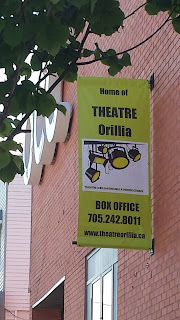 Come join us for a laugh and support our theatre company's inaugural season.
Besides Affections and All for Nun, we offer Oscar Wilde's classic 1895 comedy- The Importance of Being Earnest! That show goes up at St. Paul's Centre in September and October.

Check out our website www.theatreorillia.ca and order your tickets online. You can also call our Box Office at 705.242.8011. Our Box office at the OCC is open 11 to 2PM daily and up to including show times on show days Tuesday through Friday.

C'mon and have a laugh at the OCC with Theatre Orillia. 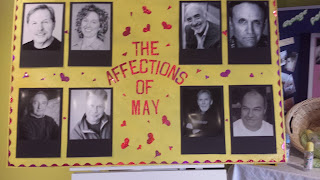 I can't believe it's been a few weeks since I blogged. I'll bet a lot of you have given up on me.
It's just that my mind has been elsewhere these past weeks and I really need to slap a post-it note on my forehead and start blogging on a more regular basis.

So, this is BLOG #580. Maybe I'll stop at #600. Of course I said that about #500 and here I am- most of the time. Usually, when I sit down here at the keyboard something comes from this brain of mine. I usually find writing a little story the easiest. I type a line and I just build the story from there- never knowing where it will take me. I should look back and see how many little tales I have written. Maybe they would fill a book.

I had full intentions a couple of years ago to self-publish a book and call it Banana Oil- something my Dad always said when he found something silly or unbelievable. I still think it's a good idea, it's just getting around to it.

That's not happening over the next two months. My company Double R Productions- in association with Theatre Orillia, is presenting a season of three "live" theatrical shows at the OCC- formerly Orillia Cinema 4. By the time you read this, rehearsals will be underway for the first show- Norm Foster's The Affections of May.

The second show opening in July, is one I wrote called- "All for Nun- A Stage Xtravaganza. Just read the previous Blog to find out more about the show and the "Diva-like" Star I wrote it for. That one will be tons of fun and is certainly beating Affections and The Importance of Being Earnest- our Fall show, at the box office. More than a dozen bus tours have booked in for that show alone. Sister Mary Margaret- the star, will be pleased.

I am pleased too. I do worry though.
You see, selling tickets is one thing, now I have to make sure the show is really, really good or it will all come back to haunt me.

I believe it is a funny, funny show and with the actors we've hired I can guarantee it!
Get your tickets soon. One show is already sold out- more pressure!
Box Office is 705.242.8011.

So, that my readers will take up a great deal of my time throughout June and July. Then, a small break before rehearsals start mid-September for Oscar Wilde's The Importance of Being Earnest. I stood next to Mr. Wilde once.
"You don't say!"- I hear you mutter surprisingly.
Yes, it's true however, Mr. Wilde may not have noticed me, since he was lying dead inside his tomb at Pere Lachaise Cemetery in Paris at the time. Sounds good though doesn't it?


If you live in the Orillia/Central Ontario area, come and support Theatre Orillia and our actors and crew. They've been working hard so far and I have no reason to doubt the quality of all three shows will be extremely high- and professional.

That's the name of the game in summer theatre. The show rehearses for 10 days or so, then it gets up and runs for three week. Towards the end of the first show's run- Affections of May, we start to rehearse the second show All for Nun. Some actors are in both shows, so it's a credit to their work ethic to pull off rehearsals and a running show at the same time.

Go to our website www.theatreorillia.ca to find out more.

See you at the Theatre!