It's Friday Night about 1135.  Steve- a handsome, brown-skinned boy with dancing eyes is preparing for bed when Jesus drops by for a visit.
Steve: So, stop looking at me like that...
Jesus: How should I look at you Steve?
Steve: Well, not like that. It’s more of a leer than looking.
Jesus: How so Steve?
Steve: I dunno. It’s creepy!
Jesus: Creepy in the way you sleep naked or creepy that I know something that you don’t?
Steve: You know that I go to bed in the buff?
Jesus: Oh yes, I know that. I see that Steve. I drop by every night to have a look at you.
Steve: Alright. Now I’m feeling like a whore. I feel creepy and I feel like a “whore of Jesus”.
Jesus: That’s what it’s all about Steve. I am BIG while you are tiny. I make the rules Steve.
Steve: I know. I heard.
Jesus: I also know what you do in your private moments! ~grin~
Steve: No! Not that too. You bast...
Jesus: Uh, Uh, Uh, Steve. You wanna get to Heaven don’t you?
Steve: Yes. Of course.
Jesus: Good boy. Now watch your language and take off your pants.
Steve: Whaaaat??
Jesus: You heard me. Take ‘em off… and nice and slow too. I like it nice and slow.
Steve: Jesus!
Jesus: Yes?
Steve: No, I mean JESUS! 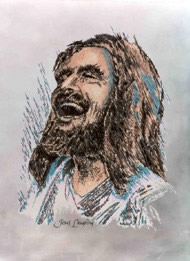 Jesus: Come, come now Steve. I am the puppeteer and you are the puppet. You know you’ll do what I ask for...
Steve: Or what? ~slipping out of his jeans~
Jesus: Or I’ll make you climb the fire stairway, only I’ll cover it in slippery, hot oil.
Steve: You bloody, big bast...
Jesus: Now Steve. You think this is tough? Imagine what Satan would ask of you?
Steve: NO! I don’t want to think about that! Okay. Okay. I’ll do it.
Jesus: Nice! Very nice! Remember Steve, nice and slow and maybe take the shirt off too.
Steve: Pervert!
Jesus: Thank you Steve. I like boys when they talk dirty. ~pause~ My! You are brown all over-aren’t you?
Steve: Oh shit…
Posted by Rob Reid at 7:27 AM

Today, I present to you an Incomplete, Fractured Tale...of Sorts.

Jonathan Ibberswash- coffee in his left hand, pulls back the bedroom drapes with his right and stares out into the bleek, cold world of a Sunday in winter. His naked body shivers at the scene of frozen white as he takes a big sip of his coffee.

The snow falls and swirls.

When is it fucking going to stop? At least he was warm inside. Jonathan glances down at his naked, size eleven feet and pats his hard, hairy stomach. It takes his mind off the cold for a few seconds.  He pictures his hardbody lounging around a pool in the hot sun, not standing here before this frozen wasteland. A few seconds later he turns towards the bathroom.

After a shower and shave he slips into his favourite jeans and sweater and heads for the front hall. He ties a scarf around his neck, crawls into his favourite leather jacket and pulls on a pair of warm gloves his Aunt Mary gave him this past Christmas. Sitting on the wooden  bench next to the closet he sticks his size eleven's into fake fur-lined boots and heads out the door- carefully locking it behind him.

Still cold.
Still snowing.
Still blustery.
A good hot breakfast would do.
In the garage he gets behind the wheel of his red Mazda and calls his friend Matt.
"Hey Buddy! You up?"
"Yeah. Of course."- was the reply.
"Still up for breakfast Matty?"
"Yeah. Sure. Where? Dumbo's?"
Jonathan winced- "Sure. I guess. If that's where you want to go."
Matt comes back- "They have great eggs benny and their waiters are cute!"
"Ok. Fine."- Jonathan didn't want to argue. Matt was his best friend and he liked their Sunday breakfasts. They always lingered for a couple of hours and talked about everything under the sun- including boyfriends and hot prospects. "Pick you up in 15. I want to stop at Mac's for a Sunday paper."
"Gotcha."- says Matt.
"Oh and Matty?"
"Yeah?"
"Wear underwear. It's far too early in the day to watch that monster of yours trying to beat its way out of your tight jeans!"
"Jealous much!"- Matt says laughing, as he hangs up.

Jonathan pulls the Mazda from the garage and heads to Mac's just a few blocks away. After getting his paper, he settles in for the 10 minute drive to Matt's. He plays some k d Lang as he drives through the frosty mid-morning.

Matt's waiting at the door when he pulls into the brownstone's driveway. Matt swings his long, hard legs into the passenger seat.
"Morning Jonathan, get your paper OK?"
"Yes but it was the last one. I was lucky."
Jonathan pulls the car onto Bridgeway Drive. Another five minutes and they'd be at Dumbo's Diner.
"Got any George Canyon on that thing?- says Matt as he looks at the CD in the dash.
"Sure. You've got a thing for big cowboys- haven't you." Jonathan chuckles.
"You know John, I believe it's those sexy cowboy hats on big, sturdy frames that sets me off!" Matt slaps Jonathan's thighs and laughs." Mr. Canyon is all that and more!"
"Tramp." says Jonathan.
"Slut". Matt replies.
"Cock-chaser!"- adds Jonathan.
Matt just laughs again and turn up George on the Mazda's speakers.

Five minutes later Jonathan wheels the Mazda into the parking lot at Dumbo's where he pulls into a spot practically at the front door.
"Looks dark in there."-says Matt.
Jonathan slams the steering wheel with his big hands. "Oh shit. Look. Signs says closed for renovations!"