Note: I told myself I wasn't going to write anything more about the demise of my summer theatre company but something just got my "big boy" panties in a knot.
I know what you're saying-
Let it go Rob.
I will...
Soon.

The past two years I found myself busy getting shows ready for a new summer/fall season for Orillia Theatre/Double R Productions.

This new year there will be no new summer/fall season from our company and probably never will be again but I have a couple of questions and comments to make.

Where were Orillians who saw this week's "Orillia" shows at St Paul's Centre when 5 shows from Orillia Theatre/Double R Productions provided work for non-union actors and crews for the past 2 seasons? We didn't see most of you.

One show we produced even ran out of town during the time it was at the OCC in Orillia. A bold step to take for a small theatre company. We were also the first professional production to use the new St Paul's Centre stage. Maybe we just didn't get the word out there. Maybe people didn't understand what we were attempting to do- that being to give Orillia and tourists, a second Summer theatre company to choose from with more show choices. 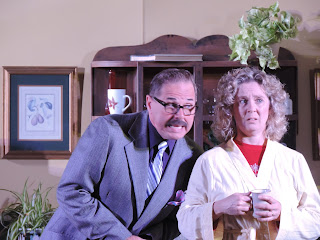 Where were Orillia City councillors when Orillia Theatre/Double R Productions- a not for profit company needed support? A presence at the very least. We also raised funds for local not for profits including Couchiching Conservancy, Green Haven Shelter for Woman, Big Brothers Big Sisters and the Sharing Place Food Bank. We have now folded after 2 years of providing work for actors and crew due to small audiences and expenses.

We are happy to say we did get two $500 grants from the city- one each season, which we were very, very grateful for receiving. Still, it would have been nice to see "bums" in the seats. We thank our sponsors and advertisers. It couldn't have been done without you!
We thank the local media who granted us many freebies. We also spent our funds with that same Media which brought us little in return at our Box Office. We don't know why. Our shows were professionally produced and well-received by all audiences both local and out of town who attended. You should have seen and heard the accolades from audiences after each show.
They were delighted to say the least.

Instead of other theatre companies working with us and supporting us, we as a company- or at the very least me as Creative Director, was shunned. We sent theatre goers- even a bus or two, to other local productions when we didn't have a show on a particular day or were otherwise sold out. We were willing to work together.

This year in 2017 Orillia again only has one summer theatre company run by the city in a city-run facility. Orillia Theatre/Double R Productions has closed due to lack of audience support and funds- yet we provided a professional theatrical experience for not only our actors and crew but our terrific audiences. Out of town theatre-goers shopped in our stores, dined in Orillia restaurants and visited our tourist destinations. 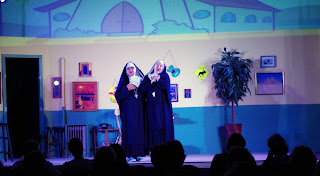 It was always an uphill battle to be a small, successful, not for profit theatre company and for that I am sad for Orillia Theatre and Double R Productions. Our success was due to everyone from cast and crew to our box office and promotion people. They all worked extremely hard.

It's hard not to take such a disappointment and failure personally- and I do.
It was time-consuming, tiring and stressful to produce our shows,
yet it was fun too and right now- I am missing that fun.
We tried our damndest... to be sure.