“I’ll trade you my house. I’ll kill my parents!”

Kids in Canada watch this TV show. Many adults too. They should know better. The line wasn’t even funny and could have been left out. In a country where a singer shows her bare titty and that makes major news, how does this type of comment pass?

I think Glee could be a better show. I would love to see a show such as this developed by a Canadian Network. How hard could it be to be better? In the same manner that would work towards making Glee better.
First of all stop having white kids sing rap.
Listening to black kids sing “rap crap” is bad enough- but white kids and Asians?
Whuck? 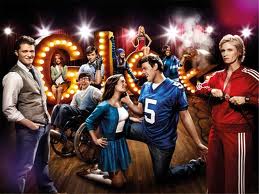 After a year of watching most episodes, I realized, watching Season Two’s first show, that the “lyp synching” is getting tiresome. It’s bad. Is far from real looking and I just don’t like watching it.
Why can’t the actors sing to recorded tracks at least and have it filmed live. That would show real talent. Real balls. Real “Glee”!

While I’m on the topic of Glee, that little Gay fella, why doesn’t he get more solos? He had a couple last year but that Barbra Streisand wannabe runs away with the most solos in the show.
And please- the tears in the two songs she “L.P.’d” in Season 2, Episode 1.
Give it a rest Dear, you’re too young to be singing those heartfelt ditties.

Don’t stop me. I’m on a roll!
“Can” that Justin Bieber lookalike with the huge lips. Is he a new character this year?

On the other hand, the Female football coach is wonderful, as is Sue (Jane Lynch) and Will.

Finally in my attempt to right the wrongs on Glee, there’s John Stamos as the dentist.
Va va va voom!
You can put paste on my “brush” anytime!

Let’s get this story going.
How long before he is stripped to the waste and his tanned, hairy chest exposed to the camera.
Look out ‘Will”! You may have abs and those two muscles that disappear “down there” into the darkened recesses of your jeans but…

Mr. Stamos is “hot” on your heels.
Oh sure, he can sing- but do we really care?

Why do some of my blogs eventually lead to all this Gay innuendo?
Haven't a clue!