One Sunday night back in 1965- just after the Ed Sullivan Show aired, I decided to wash my hair for school the next morning. I had a habit of washing my hair every other night- if not every night. This didn’t always sit well with my Dad, however.
Firstly, we were on a septic tank system and all I ever heard my entire life was-
“Go easy on that water. We have a septic you know!”
Duh.
Secondly, my Dad considered hair-washing to be a once a week ordeal only. I begged to differ. I was just a teenager. I begged to differ on most things.
So, Ed Sullivan had just ended. The Supremes had been on with Eddie- twice, and through it all I had to endure my Mum and Dad talking and making comments through both songs they sang.
My Dad says: “I don’t know what you see in those darkies”.
Yes, he did say "Darkies". Can you believe it?
I asked them both to be quiet, so I could watch. Oh and I hoped they would keep their comments to themselves.
“It’s my house and I’ll talk when I want!” This outburst from my Mother’s side of the peanut gallery.
I groaned.

The theme from Bonanza started. I opened the cupboard under the kitchen sink and reached for the metal washpan. It was silver and all banged and dented. Everyone used it. Everyone also washed their hair in the kitchen sink too.
Why?
We had a tub- but no shower.
Our bathroom sink was the size of a gravy boat.
The kitchen sink was just right, even though it was in full view of everyone in the house.

I loosened the cap on the “White Rain” shampoo bottle and started to pour a bit of its silky smoothness into the palm of my hand.
“You’re washing your hair again?”- says my Dad.
‘Yes, I’m doing it for school tomorrow. There’s an assembly.
“Ahhh, banana oil! Nobody needs to wash their hair every damn night!”
“I’m not-Dad. I usually only do it every other night.”
“Banana oil!” was the retort once again.

What’s a guy to do? I don’t want to go to school with greasy hair. That was so 1950’s and only a “greaser” would want their hair to look unwashed and slick. Of course a little dab’ul do ya” helped. Brylcream. A man’s one and only grooming tool for manageable and slick hair. Brylcream was all white grease in a handy, squeezable tube. Believe me. In 1965 there were plenty of greasers in Orillia and the company must have made a mint. In fact calling out to someone – “Hey Greaser!” could be either a bit of a put-down or a term of endearment. Depended on the situation. 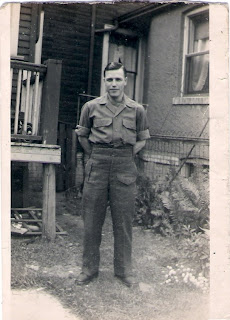 My Dad (that's a 1940 era picture of him to the right) used this little product called “Groom ‘n Clean” from Mennen. It too came in a tube. He always poured a hefty bit in his palm every morning and combed it through his hair. Now this wondrous hair product was supposed to clean your hair as you groomed or combed. Can you imagine? Adding a big clump of grease from a tube to your hair and combing it through to clean your hair and scalp. Dad thought it was great and fit right into his once a week schedule of washing his hair with real water and shampoo.

I say “banana oil!” It couldn’t possibly have made your hair clean. It was nothing more than an advertising gimmick from savvy advertising men who probably used cases of the stuff themselves. No sir. I stuck to warm water, shampoo and a crème rinse. I believe that’s why I still have my hair to this very day. I took care of it and I shampoo and condition every day. I hold it in place with a water-based styling liquid. No goop. Of course it could be genetics too but from my Mum’s side not the “Groom ‘n Clean” side!

I’m not sure where Dad got that term “Banana Oil” from but I intend to publish a book using that title. Now that I have gone and told you, don’t steal it from me!!

Have a nice, clean hair kind of day- won’t you?
By the way this is the 50th ROBBLOG I have written here at Rob Reid ONline. Neat, eh?
Posted by Rob Reid at 6:37 AM