Who thought that one up?
Probably the same meathead(s) who thought they were doing us a favour when they “re-paved” our sidewalk with asphalt last week.

Not the entire sidewalk in front of our house, you understand.
Just patches.
They even paved part of the lawn. The end result resembles a colouring book of sorts. Something like two year old artists who colour “outside the lines” when working on their colouring book. However, this wasn’t enough for these city guys. They even added an asphalt ramp at the corner so wheelchairs and motorized chairs could travel up and off the sidewalk with ease.

There’s a problem lies just 10 feet across the road, however.
There’s still a curb on the opposite side!

Now, back to the snowmen. More city tomfoolery only this time the Downtown Management Board flexed their creative muscles.
I walk to Downtown Orillia on Friday afternoon to meet friends for a coffee at the Mariposa Market Café. As I walked along Peter Street South, near St. James and the Stubley Auditorium, I looked up at a lamppost because I thought I saw something unusual.
What was it?
The sun was partially in my eyes so, I walked to the opposite side of the post and peered skywards. What I saw was unusual to say the least.
It was a poor, sad, lonely figure slung on the cross-piece of the lampost.
Suddenly, I realized it was a stuffed snowman.
Looking ahead up the street towards Mississaga Street, I saw even more of these creatures slung tightly- with plastic twist-ties, to the tall, black posts. Many Snowman- fixtures of the Christmas Holidays, hung up there on the multitude of downtown posts. Limp, lifeless, friendless, unhappy with their butts “smushed” up tight against the cold steel.

"Look Daddy, is that a dead snowman? Who killed them?"

"Were the snowmen bad Mummy?"

"Why doesn't someone cut them down Uncle Bruce? Why doesn’t someone just cut the poor things down!"

Reminds me a bit of all those old Steve Reeves movies. Steve would be tightly bound, half naked, to a post – like the snowmen, on the back of a chariot. The Romans had captured him and planned to show his musculature off in the coliseum the following day- just before a lion tried to rip his brawny bod to bits. Steve always won. He usually threw the lion over the fence. 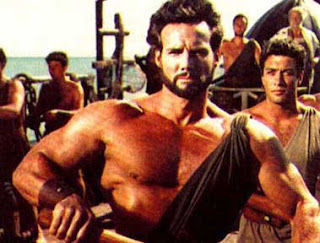 Hanging folks up was a staple in those old Roman days. When the victorious Legions returned to Rome, often hundreds of the “condemned” were hung on crosses along the entrance way to the city in order to greet the victors. It was a real party- sort of, Roman style.

Now, a similar site will greet Parade goers- and Santa Claus, next weekend all the way from our waterfront to the Orillia Opera House and beyond, unless we rise up and save some snowman lives. Can’t we reach out- and up, and save these poor frosty devils. Can’t we re-hang the poor merry, jolly, frosty bastards?

It makes me sad looking up at them.
I should be feeling joyous not like an extra in a Steve Reeves film.

Send your letters now. Call the Downtown Management Board who perpetrated this horrific act of seasonal torture and ask them to take pity on Frosty and his pals.

I heard through the grapevine that there were a ton of complaints and furthermore the snowmen will be freed from their pain and torturous positions.

There is a Santa after all.
Praise Santa!
Posted by Rob Reid at 9:33 PM