How does this kind of talk pass the censors?

Two U.S. Television programmes I watched recently, referred to shooting someone. One was Cougar Town. The cast had this game where a pretend “finger” gun was pointed to a character’s head, forcing the other character to tell the truth. If the character hesitated the “gun”- actually the thumb of the fake gun, was “cocked”.

I found it chilling. At one point 5 characters held each other “hostage”- like Dirty Harry meets 10 “hand” guns.
Was it funny?
Nope.
If this is the depth that this sow has sunk to, then wrap it up now. It isn’t funny.

In another Comedy show one character warned another to rat on a friend or he says-
“I’ll kill your family”.
Comedy?
I don’t believe so. 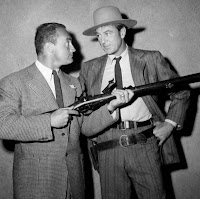 This is the same country where the television show Glee during a recent Hallowe’en episode, changed the lyrics from a well-known song from “heavy petting “ to “heavy sweating”, while in the same scene an actress wheeled around the room perched on top of an actor’s crotch who was plumped in the seat of a swivel office chair. The male actor was stripped to the waist!
Who among us hasn’t had this fantasy dream once or twice…
You haven’t?

As they wheeled feverishly about the room, she held on tight using his neck tie-which hung down his naked, hairy chest. I’m not saying the sight of Mathew Morrison stripped to the waist is a bad thing but why was one thing “good” and the other “bad” for impressionable young minds?
I presume it’s that “right” to carry arms thing that is well-embedded into the American psyche.
The Big Meals.
The Flag.
The Right to carry a firearm.

We don’t need to be too smug here in our own country either. Yes, we have the firearms registry but don’t think for a moment that the Harperites wouldn’t be much happier if we all drove around in rusty pick-ups, brandishing our rifles as we flew along dusty roads and traffic-choked highways with barely a tooth in our heads.

A few years ago- before the registry, two neighbours boasted they had put the family black lab to sleep.
One would believe it’s the final act of love a pet owner can perform for a loved member of the family.
It is.
Except- in this case, it was a bullet through the dog’s head in the basement. I don’t know the details and I never want to know.

Yes friends, there are “Rednecks” in our little province of Ontario- not just in rural, Albertie!