I know God blesses Canada. It says so right in our national anthem. According to the Anthem’s lyrics-“God Keep our Land Glorious and Free”.

It'sA plea of sorts from the small folk down on earth up to one big Mother in Heaven.
However, she also blesses the United States.

Is also seems she loves the entire planet.
I know you’re saying –“God’s a woman?”
Well you have your faith.
I have mine.

Now this assurance of love from a “superior being”- no, not Stephen Harper, comes from a “God-fearing, bible-thumping” American- John Shimkus, who wants to head some political committee in the U.S. that….that….well, it does something or other but for the most part it will bring “God” back to American ideals of Conservatism that liberal-minded Americans have taken away from the rest of the country.
Hmmm. How can I make this easier? Where's Julie Andrews when I need her?

Oh yes.
Doe Rei Mei what Harper has already done to this country including losing that post at the United Nations.

Now, I hate to point to the religious right again but really folks, you all can be a bit Neanderthal at times. This is 2010 after all. There are certain items on our check list that we are certain about.
I hear you.
You have to have faith.
Damn. That faith argument always rears its ugly head. There is just no possible answer to that.
You either have faith of you don’t- as I have said in other blogs.

Speaking of this word “faith”, John Shimkus has it- and he quotes it too, in spades!
He is telling Americans to have no fear. God will not destroy the earth. He notes that God told Noah in Genesis 8 :21-22:

“Never again will I curse the ground because of man, even though all inclinations of his heart are evil from childhood and never again will I destroy all living creatures as I have done. “As long as the earth endures, seed time and harvest, cold and heat, summer and winter, day and night, will never cease.”

John says he believes those words are the infallible word of God and that’s just the way it is so tough beans.
He also mentions the Book of Mathew in the New Testament. Mathew 24: 32 to be exact-

“and he will send his angels with a loud trumpet call and they will gather his elect from the four winds from one end of the heavens to the other.”

So, it appears we will have music. He doesn’t mention dancing.

So John surmises that our green planet will only come to an end when God says so. Women, eh? They can never make up their minds. Based on that alone, I believe we’ll be here for a long time yet. 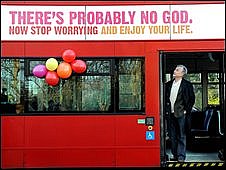 He says that even man will not destroy the earth by flood or anything else. John doesn’t mention that Mayan prophecy that says the world will end in 2010 because that’s evil, native, heathen-based muck. Nor does he mention the probability of a meteorite smashing into the globe- at least not over America, where by the way Jesus- according to the Mormons, has already been in Utah and that must be good luck for them at the very least.
Now, those are my words not John’s. I translated his words for you and added the bit about the Mayans and the rocks hurtling through space because John conveniently left them out. He also doesn’t mention that God will protect Americans from terrorists.
That doesn’t appear to be working out too well- so far, does it John.

John is also a big believer in God’s word being-
infallible,
unchanging,
and
perfect!
My, she would be pleased!

I still prefer the day-to-day philosophy that says:
“There’s probably no God, now stop worrying and enjoy your life”.
Sorry Johnnie. Try to have a good day!
Posted by Rob Reid at 9:12 PM