My Baby Turns 5 Wednesday March 7, 2012.
Yes, 5 years ago- if my memory serves correctly, Charles (Chuck) McLachlan told me that I could buy the SAM Broadcaster programme and run a radio station from my home.
I don’t think I believed him at first.
Anyhow, Chuck got me the SAM programme. I pushed a bed aside in one of the rooms that Tom and I once for Bed & Breakfast guests and placed a computer on an antique table. Chuck configured  the computer and Swisssh Radio was airborne.
Well, not exactly.
We had mega problems at first.
The stream- that’s like an antenna in Terrestrial FM/AM Radio, was uneven.The station spit and sputtered at times. The programme stopped or froze or played the wrong song. I should see if I have recording of the early days on CD.
One of the major problems was the internet. It wasn’t fast enough so we increased our service to the highest of High Speed. It took a couple of years but eventually I moved from wireless to a hard-wired connection. Once I did this problems with the internet ceased- for the most part. Tom and I ran a hundred feet of cable from our basement through walls and stairs into the studio.
Funny how things evolve and how one learns.
Many times in the early days I would call Chuck and cry help.
I mean “cry”.
Literally at times I was so stressed with Swisssh Radio I felt like pitching the computers and microphones out the window. Charles calmed me down on several occasions and prohibited me from contemplating computer suicide. How Tom stood those days I will never know. He was supportive and helped where he could. 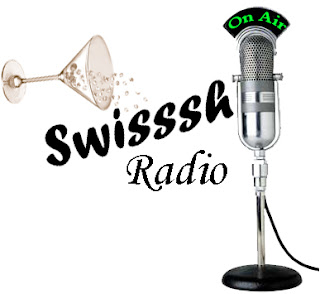 The station started attracting listeners. I worked my butt off trying to be a local radio alternative. I had people coming in to record shows and interviews. It took me a couple of years to realize that there was no payback. Most people I gave free time to didn’t reciprocate by listening.
Many advertised and were supportive like Linda Tiffin at Tiffin’s in Downtown Orillia.
Krista Storey- who was with Culture & Heritage at the time, bought spots. At election time I had candidates on the air advertising- except for the Conservatives  both provincially and federally. No surprize there.
It was tough trying to tell people that listening to internet radio was easy. I attended festivals and events with my little Swisssh Radio tent and signs and played the station to those passing by. Sometimes “live” if the WiFi was available. Other times I recorded several hours on CD and played it back, suggesting it was “live”.
I took part in the Orillia Santa Claus Parade for 5 years straight. The Swissshmobile has been transformed into a different Christmas Theme each year. I even won second prize the first year!
Now five years down the road Swisssh has changed.
The audience is not as local as it once was. As Internet Radio has grown so has listenership around the world. Swisssh Radio is no longer a local station- which makes attracting local commercials and content difficult.Name a country and you’ll discover Swisssh has had a listener or two. Just check out the revolving world map on the Swisssh website and look at the coverage.
It’s amazing!
Swisssh gets e-mails from all over the place.
These days, it’s so easy to listen to Swisssh and Internet Radio.  Listening through your computer is passé. There are Internet Radios on the market. One can listen through Smartphones (through- tunein.com or iTunes.com) or a variety of devices such as Samsung Galaxy Pads, iPad, Notepads etc.
I have to say that Canadians- yes even Orillians, are slow on the Internet Radio thing.
I don’t know why. It’s such an easy concept these days. Europe is way ahead. It’s normal for them to tune into Internet Stations. It’s really the first time in radio history that they’ve had such variety when listening to radio. I suppose countries like Saudi Arabia, Turkey, Iran, Russia and others get a feeling for the west, when they tune in to Swisssh Radio.
Other changes in five years?
The Swisssh website is all radio these days not an entertainment page. It lists programming as well as local events in a Community Post-ed Notes section.
Swisssh can be heard on many linked sites around the world.
Swisssh Radio is a SOCAN member, paying yearly fees for the music you hear.
From one computer in the studio, there are now four!
The studio has new microphones, improved wiring, connections and lighting. When someone new comes into the studio, they are amazed at what they see.
I like that.
Another major change is the addition of a sister station to Swisssh Radio.
What?
Am I mad?
Probably.
Starlite Radio went on-air January 1st 2012 playing “Beautiful Music” not like Swisssh Radio’s eclectic mix.
So, I take this moment to say thanks.
Thanks to all of you who helped with Swisssh.
Charles McLachlan- especially. It just wouldn’t be without Chuck.
My Husband Tom.
He puts up with a lot from me when it comes to Swisssh Radio. I still stress at times when things go wrong but it’s not that often these days.

Thanks to others like Heather Thompson who does the Morning Show at Night “live” with me each week. Sue & Jeff who record their show- In Our Cups, every week.
Don Andrews who records commercials, ID’s and even goes “live” to air occasionally from his Studio B in Toronto. He gives me lots of advice too- even when I don’t ask for it!
Todd Miller from RTDS.com who provides his Vinyl Vault and Small Biz Shows.
A newcomer to Swisssh Radio- Johnny Maraca and his Rock and Roll Riot, provides two hours of programming each and every week. Terrestrial Radio dumped him. I picked him up. Now he’s airing on other Net Stations as well.
Where will Swisssh Radio be five years from now?
I can’t imagine.
I would love to have a Storefront location in downtown Orillia. Broadcast some day parts
“live” and invite audiences in to watch and take part.
That would be fun.
So, thanks for your support and
thanks for listening.
Send us a Birthday Wish at Swisssh@rogers.com
We'd love to hear from you!
Posted by Rob Reid at 10:27 AM