What the hell are those Catholics up to now- specifically the Pope.
He abdicates?
So wad up wit dat?
There has to be more of a story behind the story.
There are the rumours of him making a deal with the Italian Government because there is some
“Homosexual” stuff that’s being suppressed.
I know.
It’s hard to believe that the Catholic Church would hide stuff from the world isn’t it?
Only kidding!
Well who the hell would be surprized at anything the church hides from its flock.
So, take a Gay Catholic man who wants to hide from himself and the world.
To where does he run?
Right into the Catholic priesthood of course.
Now, I am not saying that Mr. Benedict is “light in the ruby slippers” but there is some sort of “Gay Catholic Mafia” thriving in the Vatican.
What the Fuck you say?
Of come on!
It’s been hinted at in all the papers. Mostly, online in European Media. Some “Gay Chain of
Command” is controlling what really happens in Vatican City and I’m not just talking fashion and home decorating. I am talking about changes that may lie ahead, now that Benny has stepped down.
So, cool your jets.
God’s representative on earth hasn’t done something like this since Jesus was a choirboy.
It’s all new.
Precedents are being set.
Beef may be back on Friday’s Menu.
The Past Pope still gets to wear white- ever the virgin, just not those pointy hats anymore.
Will he step out on the town?
Will he have an espresso at a Gay Café in downtown Rome?
Why not?
If  he wants a trendy coffee or spend an afternoon shoe-shopping- why not?
He’s not dead.
He’s just a former pope.
Of course right now some starving peasant in Mexico or Columbia makes “the most comfortable brown shoes ever” that Ben- reportedly, is only too happy to wear in place of those red slippers.
It’s like coming home. Our friend Dorothy was probably happy to slip back into her rubber boots when she returned home to the farm in Kansas after her whirlwind trip to the “Emerald City”.
However, unlike Dorothy, his “Holy-Mess” still gets to live in the “Emerald City” in Rome.
Although, right now, he’s spending some time at the summer house while his apartment is being re-decorated  back in the city. I wonder who’s doing that?
Chris and Steven?
Ben Emeritus- that’s his new name, says he’s going to pray and have a “think” for the rest of his life and here I thought my life was boring as hell.
Of course he may have some nice things to look forward to.
Chatelaine and Men’s Fitness magazines will still arrive on time after a change of address card is sent.
He will still have staff- and his rod too!
Maybe there’ll a new pool boy to gaze upon- clad in a tiny Vatican Speedo, for those lazy summer days lingering around the Holy Pool. Remember, this is the Pope that had several stripped-to-the-waist acrobatics tumble and tuck- I said tuck!- for him and the Carninal boys.
Then, he’ll need a young strapping lad to cut his toenails or shave his back.
Ben will need someone to dress him in the morning and help me retire at night.
A Holy Laundry Lad will be on duty to beat the “skid marks” from his poo poo undies- using a blessed rock, down by the banks of the Tiber.
What fun will be had by all!
Maybe some of the bitches from the Holy Gay Mafia will come by and spend the weekend doing what men do with boys. I mean, the Catholic Priesthood wrote the book on that pastime.
So, people let’s not feel too sad. Brighter days are ahead and no, I don’t mean the Catholics will finally treat women with the equality they deserve- oh My Goodness- No!
I mean maybe the Holy “C” will finally easy on down the road towards the acceptance of Gays, Abortion, and sexual protection.
Stranger things have happened. 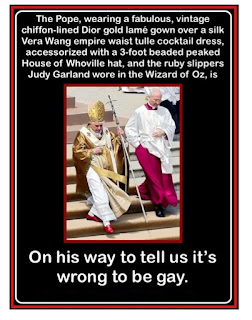