Antony Starr…where have you been hiding?
The other evening, I read about a new show called “Banshee”.
Same creator as True Blood- Alan Ball. So, I checked the sked and found it was on
HBO Canada.
Seven or eight episodes stockpiled.
I sat down and started to watch.
I knew it would be a little weird. A little bit bloody. There’d be good guys and bad guys and probably hunky men.
Right. Right. Right and Right!
Antony Starr you little hairy-chested stud. Where have you been hiding?
Brooding. Tanned. A six-pack- and I don’t mean beer, plus a neatly trimmed chest of wiry, dark brown hair that is one of the most pleasant sights I have had the fortune to gaze upon recently. 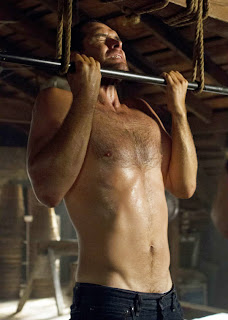 Apologies to Hugh Jackman.
Now Hugh, you need to know Honey- you are on a different level altogether.
You’re in my top five with Mark Tewksbury, Paul Rudd, Alexander Despatie and recent addition Drake Jensen- Woof!!
As for Antony, chin up- and I’ve seen you do that, you may be a new addition to the list soon.
Banshee starts out fast.
I’m thinking it might be a Gothic Horror piece what with the name but no the series starts with a New York City car chase.
Exciting if you like that stuff but I was close to turning it off.
Minutes later we move to Banshee- somewhere in Pennsylvania. It’s like Kitchener-Waterloo without the guns and with a bunch of Mennonites- Amish as they are called down there.
It didn’t take long before Antony, I’ll call him Tony, pulled his tight Tee right up over his furry body.
Yikes!
I think I screamed out loud!
In a later episode his little butt cheeks are fully naked, jiggling nicely as he pile drives a Mennonite “friend” up against a brick wall. Don’t get too excited here boys. You have to block out the image of the Mennonite Chick on the receiving end.
Now if I was Alan Ball, that scene would have had an entirely different flavour- if you get what I mean.
Tony’s eyes are dreamy and his cute little mouth and sultry lips a real come-on.
Oh!
You want story bits.
Well he …
Could be a ***SPOILER*** here so you may want to stop reading this next paragraph.
He has been in prison 15 years, so I am sure he is no stranger to mano-a-mano fooling around which makes it kinda silly when he takes out all his sexual aggression on the womenfolk.
I mean really. Fresh out of jail and he forgets all of a sudden that he had more boyfriends than he could shake his dick at!
This comment is not a spoiler. The writers do not intimate that Tony’s been intimate with anyone.
It’s just a dream and really- 15 years in prison and not skin-to-skin company?
Pull- Leeeease! 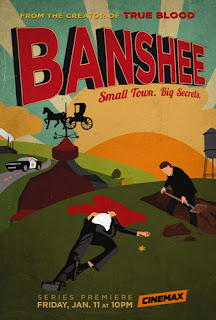 So, Tony comes to Banshee and takes on the name of the departed sheriff- Lucas Hood, who was killed in the first half hour of episode one.
How fortunate for Banshee.
From there we learn who’s a good guy, who’s the bad guy and what went on between Lucas and the female lead before prison interrupted his life 15 year ago.
By the way he must have been thrown in prison while still a young man- a studly young man
I’d guess, unless the muscles and six pack come from lonely days and nights in the slammer, where I’m sure he slammed more than his powerful fists upon a table or two.
***End of SPOILER***
There’s a ton of other stuff too but you’ll have to start at the beginning.
It’s worth it. This man has his shirt off a generous amount and that feeds very nicely into what I would hazard to be a large “Gay Male” audience.
Almost forgot.
There’s a lovable Transvestite character- Hoon Lee, who plays a hair stylist cum computer hacker who is of great help to Sheriff Hood. He really has some terribly funny lines too.
The comic relief!
Be prepared for bones to be crushed and the blood to flow. I might suggest to Mr. Ball to ask the writers to have Alexander Skarsard (Eric in True Blood) drop on by for clean-up operations. Fans just love it when characters cross over. This would be the perfect opportunity. Something like Lisa Douglas (Eva Gabor) did on our TV screens when Green Acres, Petticoat Junction and the Beverly Hillbillies all were part of our weekly television fare.
So kids, grab hold of your guns and rev up your blood-lust for “Banshee”. I am guessing by the end of the first season things are not going well for Tony- I mean Sheriff Hood, as evidenced by the picture below. 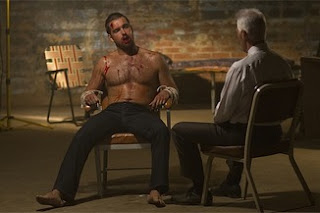 Nice gratuitous chest shot, however.
Ya got love that!