Today, a tale that bites- if you will...

Mike stepped from the shower and grabbing the thick, sage-green towel, wrapped it around his waist like a citizen of ancient Rome might have done stepping from a community baths.

He stood semi-naked in front of the vanity mirror, noticing the tanned firmness of his chest and arms. Giving them a quick flex, he smiled as he grabbed the tube of Colgate and his toothbrush from the white porcelain cup sitting next to his sink.

Applying a pea-sized bead of paste, he began to brush. His right bicep danced merrily as he brushed up and down. Over the molars, incisors and gums. He brushed furiously- yet gently, as he took numerous glances at his tight brown body. Water rolled down his broad chest and over his stomach muscles, finally absorbed by the towel tied tight around his middle.

Mike felt good that morning and amazingly strong and fit. He seemed to have a great deal of extra energy. Flicking on the bathroom radio, he continued brushing. As he did so, he noticed an irregular shaped, blue-black, coloured bruise on the side of his neck. He stopped brushing and leaned in closer to the mirror to look. Mike clearly saw a pair of perforated holes- bright red in colour, right in the centre of the bruise.

“Huh. Must have been scratched by a twig or something when I walked through the woods yesterday. Funny I didn’t see that on my neck last night”- he murmured to himself.

“Maybe a bug bite. Yes. That’s it! All those bugs flying about yesterday as I walked in the woods. It was so humid too. One of the little buggers must have taken a good chunk out of my neck and it just began to show now. Yes. That’s what happened!”

Mike was satisfied with his self-diagnosis.

He finished brushing and spat into the sink.

Next, picking up a can of shaving gel, he pushed a huge glob right in the centre of his palm, then he smeared his rugged face from left to right. He added extra gel to his neck, which was infinitely more tender than the rest of his face. Grabbing his sensor razor, he began to remove the foamy white gel being extra careful not to run the blades over the bruise. Fifty or more strokes and he was done. Running his hands over his face he was satisfied with the smoothness. Everything looked good- except for that bruise. It was even sore to his touch.
“Just stop touching it!”- he thought “-and put some Polysporin on the damned thing!”
He took the tube from the vanity chest and applied a liberal dob of antiseptic goo. 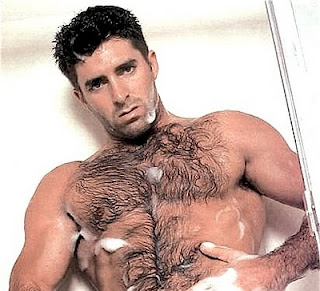 Next he applied some gel product onto his blondish-brown hair and ran a hair brush through the thick locks. Mike loved the look of his hair and he always garnered comments from friends about how great his hair looked- no matter the weather. The frizzies of a humid day wouldn’t dare destroy Mike’s tresses.
He smiled broadly. As he did, he caught sight of something else he had never noticed before- until that very moment. He couldn’t believe what he saw- at least not at first.

Right there on the lower front row of perfectly white teeth, he plainly saw his incisors had grown bigger than the rest of his teeth. Running his fingers across his teeth he noticed a definite difference. In fact the incisors seemed to be much sharper- as well as more pronounced, than the others. Or so he first thought.

Running his index finger over the top of his upper incisors, he was sure they had grown too. They hung at least a centimetre lower than the rest of his upper plate.

“What the fuck is going on?”- he cried out loud. “My teeth don’t usually look like this? What the…”
He stopped.
Near the shower stall he saw- in the mirror’s reflection, two bath towels bunched up on the floor- dotted with blood-red stains.

“What is this?”
He turned and bent down to examine the towels. As he did the towel that he had wrapped around his waist, fell onto the tiled floor at his feet. He picked up one of the soiled towels as he stood naked there on his bathroom floor.
The stains. They appeared to be…
Blood? But why? How?
He was shocked!

At that moment his husband- Roger, came into the bathroom, fresh from evening laps in the backyard pool. He was drying his hair on a beach towel as the full moon’s light streamed through the windows outlining his nakedness. He stripped his Speedo swimsuit off, down over muscular legs and feet- those of a swimmer, throwing the wet suit into the shower stall. He looked at Mike standing near the shower stall with the blood-stained towel in his hands and smiled-
“What’s up Mikey?”
Mike declined an answer at first.
“Mike! Mike. I’m talking to you!” Roger raised his voice. Getting no response, he grabbed Mike’s rugged left shoulder.
“Michael, talk to me. Snap out of it!”

Mike slowly lifted up the towel so Roger could see it.
“Roger. Look at this towel! It’s caked with blood! What has happened?”
Roger took his towel and draped it over the side of the shower stall. Then he turned and looked Mike squarely in the face.

“Not this again! How many times do I have to tell you Michael? Those marks on your neck there and there.” He pointed. “Your elongated incisors. Mike you’re a Fucking Vampire. When are you going to snap into the reality?”

Mike looked up at Roger’s face.
“I am? Since when, Hun?”
Mike seemed confused.
“Since three nights ago, you big, gorgeous brute. Look as you’re getting used to “turning” into a vampire, sometimes the memory plays tricks on you. You’ll be fine in another day or so. Trust me.”
“A vampire?” Mike seemed in a fog. “A real, honest-to goodness Vampire?”
“Sure”- says Roger. “Look Sweetie. It’s night. There’s a full moon out there and you’re shaving like its 8 a.m. Add it up Michael. It totals- Vampire!”

Mike didn’t seem to know what to believe for a second or two.
“Yah- I guess it does. Huh. I am starting to remember now.”
He paused for a few seconds.
“Well. Roger, that’s a relief.!”
“Good. Now let’s have a glass of “O Positive” and enjoy the rest of our evening, Mikey.”
Roger slapped Mike playfully on his naked butt.

“You know what?”- Mike’s face lit up with a huge smile.

“What Hun?”- Roger asked as he was stepping into the shower, “I want to get this chlorine off me.”

“That’s the general idea!” Roger laughed and turned the shower nozzle on full and stepped under the misty spray. “ Newbies. Always unsure.” He laughed again.

Michael turned and glanced into the mirror.
He liked what he saw this time.
This time he was grinning broadly.
His incisors glistened in the moonlight streaming through the bathroom window as he made a muscleman pose in the mirror.

Leaving Roger to his shower, Mike headed for the kitchen to get a couple of glasses filled with crushed ice for their “O”!
Posted by Rob Reid at 9:40 PM