1. Stephen Harper is Prime Minister and the Devil is OK with that.

2. Satan is packing an overnight bag.

3. A man in New York City has spent his entire life savings on Bus Shelter Ads proclaiming the end of the world after it was declared by a man in Tennessee. Well, my goodness, if a man from Tennessee knows when the apocalypse is coming- who are we to argue. So just how much is a good jug of moonshine in them Tennessee hills?

5. The Pope is shaking with excitement and is thinking of partying with a half dozen altar boys. Bottoms up!

6. A Kingston Radio Station is presenting a morning show called- “See you on the ‘Other Side”!

8. Flights to Hawaii are solidly booked so vacationers can enjoy a few more happy hours here on earth.

9. California is passing a law that they can lawfully break from the mainland, drift out into the Pacific and join Hawaii. 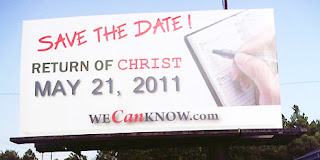 Look folks, in all seriousness why would one WANT to spend eternity with an egotistical, psychotic, childish being that would take glee in torturing billions of people because they didn’t do what he said or had never even heard of him?

Also- and even I know this, it says right there in the King James Version- the one that he told his subjects to translate and say this and that and the other thing, that nobody- not mankind, not even the angels know when Christ- if there is even such a person- which I doubt, will return. Only the Father in Heaven knows- if there is a someone in Heaven. Oh yes and Heaven is not on the other side of the clouds. That’s what they thought thousands of years ago- before Air Canada flew above the clouds. Now we know that there’s just more air and endless sunshine up there- and the moon and a bunch of other planets and galaxies.

So look, doesn’t this whole “End of the World” crap sound just a little too far-fetched- like the National News or like religion.

C’mon. There’s probably no God, so relax and enjoy life. Until one day, billions of years from now, the sun will either burn out, an asteroid may slam into us and send us out of our orbit or an even more likely scenario all those F****** with nuclear weapons will kill of the human race with the click of a switch.

Last one out, switch off the lights!
Posted by Rob Reid at 9:04 PM