Swisssh Radio has been on the Internet as a Radio Station for 4 years March 7, 2011.

Please, if you must sing the song, do it quietly and under your breath. Somebody might be listening and charge you royalty fees on the song lyrics or music.

Yes, Swisssh Radio has made it to the 4 year plateau. Four years broadcasting 365 days a year, 24 hours a day. There were a lot of problems getting the station to run smoothly in the beginning. There were days when I wanted to throw several computers out the studio window. However, with Charles’ technical savvy, the station stayed on-air and is in a good place today. We wouldn’t be here today if it weren’t for Charles.
Thank you Chuck!

The streams are smooth and consistent- unless Mr. Rogers decides to throttle the broadband which affects the encoders. He received a “stiff” e-mail letter from me two weeks ago and later that evening the throttling business stopped. Then again, that same week the CRTC also slapped his Net wrist and said- “stop what you’re doing to your customers. We know you’re throttling because we get letters!”
Once again they heeded the bosses at the CRTC.

Today on Swisssh you still hear great music. Eclectic and diverse. We’ve had “live” programming over the years from the likes of K.C. from California, Don Andrews from Studio B in Toronto and Phil Kushner from LG 73 in Vancouver. None of those shows are in existence today but there’s hope that Don Andrews will do something “live” again- if some sponsors get involved.

You still hear Don’s voice on commercials and station ID’s. I am so grateful for his help and he does it all whenever I ask and for a “pittance” too! He says it keeps him in coffee for Studio B.

Russ Horton- another Net Radio friend, runs D-Moos Halton Hills Radio in Georgetown.
He’s also ready to record a spot or two when I ask. I return the favour. Thanks Russ!

K.C. in Northern California at Humboldt 101 also does the occasional spot for me.
I am lucky in that regard. 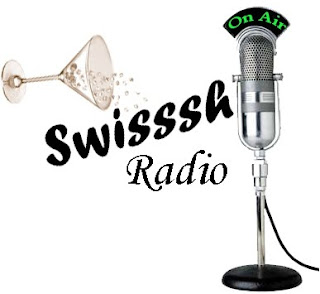 Don Andrews could be in “living, breathing colour” daily- in the windmills of your radio mind, if we could just nab some high-profile sponsors like a Tim Horton’s or McDonalds etc. I have been trying but with no sales department and no contacts it’s a huge mountain to climb alone.
I have hope.

Today, Swisssh Radio has become an international station really. That’s why- in part, I don’t bother with fetching new, local advertisers. Half of the broadcast day listeners are from outside the Orillia area. I don’t know why locals aren’t listening. I guess like most things in Orillia, if there isn’t a hockey stick attached, most people could care less. Many may still not grasp listening to radio on the Internet. In Europe for instance, it’s second nature.
In the formative years of Swisssh the Website and Swisssh Radio, I did tons of local stuff. There were interviews, reviews of shows and stories. I was even on location at local events. It was fun but time-consuming. I started to do less.

There was no payback in most cases. Everybody wanted it for free. Nobody wanted to pay for something on the Internet- even though it took hours of my time. Initially I would get a couple of advertisers and then that stopped. The website Swisssh.ca will be 5 years old on July 20th.

Today, there are other sites out there. Some have come and gone but I keep plugging away. I am waiting for the day when larger advertisers will tie-in. As for the website, there used to be about 100,000 pages viewed each month. I don’t think I’ve checked the stats in more than a year. In fact I am toying with the idea of the website being strictly for Swisssh Radio and the “players” that allow you to listen. It would once again be a lot less work for me. For now though, the community info will remain on the site.

This celebration today is for Swisssh Radio. A happy 4 years old!
Listeners are diverse. I posted a blog a few weeks ago listing the city and country names of listeners. I can add to that again.
Swisssh Radio has listeners in:

Quite a list n’est ce-pas?
There’s more too.
Germany is the country with the most Swisssh Radio listeners. Many of them are daily listeners. Eat your heart out CBC Radio!
It’s difficult to build an advertising base on such widespread listenership. That’s why I have that little PayPal “donate” button on the website. If you have a PayPal account you can simply wish Swisssh Radio a happy 4th Birthday by slipping a few bucks our way to pay for the servers that send the signal to your computer.
I would be humbled.

Yes, much has changed in 4 years. Net Radio is more portable. I listen to Swisssh in my vehicle through my iPad. You can also listen through an iPhone. I know of several listeners who do using an FM transmitter. They’re cheap at The Source.

Finally, thanks for listening and the support that comes from those of you that listen to Swisssh Radio or at least browse the website. We love to get your e-mails- swisssh@rogers.com

It is sincerely appreciated!
Posted by Rob Reid at 8:58 AM