That cutie-pie Jack Layton is having surgery.

It happens Friday and he hopes to be up and walking for the weekend. Olivia- Mrs Layton, Chow has high hopes. He’s been stumbling around on crutches trying to keep hairline fracture damage in his hip, to a minimum. It hasn’t helped so he goes under the knife.

Jack hopes that he’ll be back in the House of Commons for Harper’s budget. In fact from what I have read, it may be Mr. Layton who actually saves Parliament. It would give the Harperites a few more months to “hang” themselves or to…no, hang themselves.

Here’s a wish I have.
Let’s just vote for Jack and the NDP this time and see how he runs the country. I think it would be good.
It would be a change.
God at this point a moose living at 24 Sussex would be a welcome change. 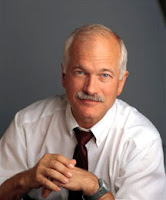 Hey did you see where the words- “Harper Government” has effectively replaced “The Government of Canada” on official forms.
Can you believe it?
That Harper guy must have had his lawyers look into the legality of “Harper Government” because he is within his rights- apparently.

Here’s how I feel.
First of all, Jesus, Mary and Joseph help us all if he gets his majority but a lot of us are just playing stupid right now. Stupid and mad at anything that’s Liberal.
We wouldn’t want to vote NDP- that’s commie stuff, right?
Yet, how soon we forget all the monkey business pulled by the Harperites over the past five years.

It’s just that in my mind the Government of Canada is my Canada and it is much more than Stephen Harper- or the Conservative/ Alliance/Reform Party.
Bloody redneck Baptists that they are!
Guess you know that I am not a fan.

Don’t feel bad about my intense dislike of Mr. Harper and what he believes in.
It’s nothing that personal, Steve.
Look, I feel the same way about Jesus and organized religion too.
You should just read yesterday’s blog about the Pope making the Jews feel all better. Releasing them from their guilt as it were.

The Government of Canada is more than a federal party.
It’s the history, the freedom and the maple leaf flag as well as all the various departments that make up our government.
It’s not just the Harper Government.
That should just remain a “media term” and nothing more. 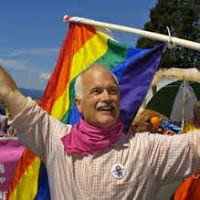 So Jack, I hope you mend well and fast. Seeing you in person at Pride the past two years you seemed healthy and happy. Yes, the prostate thing has been unfortunate and now your hip surgery but you’ll get by and be well.

Your time is here now and you have respect which is more than that other fellow could ever hope for or attain.

P.S. He's a good hugger too as I experience at Toronto Pride two yaers ago.
Posted by Rob Reid at 2:57 PM