Dress rehearsal time can be stressful.

The show I am currently in is “Looking”- from Mariposa Arts Theatre. It’s a very funny 4 part comedy from the genius of Norm Foster. Norm’s a Canuk boy and he writes brilliantly funny stuff set in plain, everyday situations. We only have a couple of dress rehearsals to go and then- yikes, it’s opening night!

Looking is a winner for Norm Foster. It was first performed in 2006. It’s about four middle- aged characters- two gals and two guys, looking for love in all the wrong places. Three of the Characters Val (Phyllis Johnson), Andy (Jim Dwyer) and Matt (that’s me) have been married and divorced. All three have kids. Only once character Nina (Patti Scott) has remained single. She’s a cop in the show.
That just might have something to do with it.
Nina Gregorian apparently is only used to putting the criminal element in handcuffs. Maybe she should try it with the men in her life. She might get and keep a man for a lengthy while. Without giving away the plot to this fast-paced comedic romp, Nina does “score”- eventually.
Is it a lifetime relationship?
Foster doesn’t really tell the audience.
He doesn’t jump too far into the future but I think, the audience thinks, she does find love in the “right” place- or bar, at least. 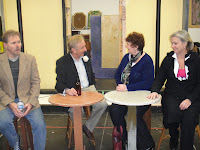 What about Matt- the character she “pairs” up with in Looking? As the actor “playing” that character, I believe she probably ends up with him- for a good while at least. Matt’s quite taken with Nina being a cop you see. He likes the “Cop” terminology like “mirandize me”.
Matt is possibly “looking” to settle down again. That may not work in the long term since Nina would be moving into a ready-made family with kids- albeit both kids are in University.

On the other hand, poor old flustered Andy can’t seem to win in either love or business. He meets Val. They don’t quite hear violins when they meet but the music does start to play towards the end of the story. She’s a nurse. An OR nurse. He sells or rents plastic containers. I am sure by the end of the play, the audience is quite satisfied with what the future holds for both of them.

Looking has been a difficult play to do. Comedic dialogue in this Norm Foster comedy has a nasty habit of repeating in either different or identical situations. It’s been a bit of a nightmare to memorize and now perform. We all have a handle on it now. So don't worry.
Thank goodness.
Opens night lurks on the horizon!

As an actor, one can only be as good as those surrounding him allow him to be, while honing his craft. There is always so much more to mounting a show than what the audience sees down on the stage at the Studio Theatre at the Orillia Opera House.

It takes a committed, focused Director like Dave Graham. I last did Out of Sight, Out of Murder with Dave two seasons ago. The show was a huge success and for that reason alone, I am back to work under Dave’s directorship.

The Stage Manager is Tom Ruechel who knows the ropes and keeps cast and crew both in line and in place. He’s ably assisted by Lisa McKinzey whom- it seems, has the middle initial “O”- for organized. 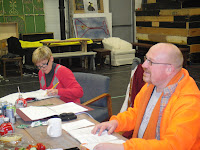 Then there’s hair and makeup from Shimera Dione. She is the absolute best! Look what she did for me (The Garage Door Players) with A Chatty HANKmuss. Shimera’s wigs and makeup made that Holiday show. There would have been no Dame Clare without the professionalism and know-how that Shimera brings to a production.

Susan Canfield and crew prepare the props and make sure the “correct” liquid is in the beer bottles and glasses at the bar The Private Dick, featured in this comedy.

Bev Totten both finds and gives the final okay to costumes. She has a fine eye and never offers a snap decision.

Max Durnford has the unforgiving task of building a set that looks “real” as well as being functional for the actors.

Phil Hull as Producer, gets the word out about the show as well as lending his support and finding a competent backstage crew to be there- backstage, for the run of the show.

All these people and departments must come together in one focused team effort to make this show a winner.
I think it will be.
Now, it’s your opportunity to be the judge- and the critic.

“Looking” presented by Mariposa Arts Theatre, opens Thursday February 10 at the Studio Theatre at the Orillia Opera House where their main concern is “safety” for one and all.
Actually, it’s not just a concern.
It’s a lifestyle.
A mantra.
A way of life.
A day to day albatross that has been flung around their collective necks and weighted down with chains and links heavier than Marley’s ever were!
It’s something they live and breathe daily.
A case for which there is no argument if one wanders from the set course.
Well, you get the idea.
So be assured, your visit to the Studio Theatre during the run of "Looking" will not only be a humorous one- but a safe one.

Get your tickets before this show is sold out!
Ahhhh. They always say that- don’t they!
It’s supposed to get lazy bums- such as you, into the seats at the little Studio Theatre inside the O.H. right at Mississaga Street West and West Street North, in downtown Orillia.
The Box Office number is 705.326.8011
Tickets are available online too. Just Google Orillia Opera House.