I hate when a writer starts a piece with "Dear Readers" but I just have....Haven't I.

Let me explain. Every week Steve Caston (A Chatty HANKmuss)
copies me in on Something he calls the Wednesday Lift. This past Wednesday he sent a small film- with a score he wrote, about a small troll-like creature that was sailing and dancing -among other things.
Suddenly, the following story came to mind. No, it's not the same troll as in Steve's film.
Anyway, here's my story.

Dorik, a small, gentle little creature with a chartreuse hank of hair shooting up from the centre of the top of his head, rolled over and gazed at the tiny gold-coloured clock on his side table.
It was 6:23.
“Goodness!”- he chimed, “I’ve slept to 6:23? That is amazing. But how rested I feel.”
Dorik always rose precisely at 6:19, so sleeping in to this “late” hour filled him with amazement. However, having a short attention span, he moved on to the next order of business on this fine summer morning-
Coffee.

He clamoured out of bed and headed down to the kitchen of his tiny, perfect cottage- which sat next to a big oak, alongside the babbling brook- and plugged in the coffee maker.

“What shall I have this morning?”- he thought out loud stroking his huge tuft of hair.
“I know!”- he yelled excitedly- “I’ll have “mossy bark”. Yes, “mossy bark” is my coffee flavour of choice. He plopped a couple of heaping tablespoons of “mossy bark” into the filter cartridge of his coffee maker, filled the reservoir with water and pushed the red “on” button. In seconds the aroma of fresh coffee permeated the kitchen.
It was so good to wake up and be alive for another day.
He was absolutely beaming! 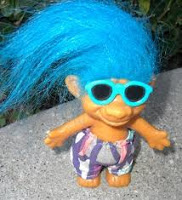 Pushing open the door that led from the kitchen to his garden, he took in the fresh, early morning air, scratching himself in the most private of places as he gazed out upon his garden and open fields beyond.
The coffee finished dripping. He paused his daydream-mode for a second while he stepped back in to the tiny, perfect kitchen and filled a mug with the steamy, hot liquid.
He returned to the outdoors, mug in hand.

Reclining on his favourite turquoise-blue lawn chair, he drank it all in. He couldn’t help but smile-
“Was this not just the most perfect of days in a most perfect world?”
An ivory-white butterfly flitted among the flowers in his perennial garden. It stopped for brief moments on the blossoms of his Jackman Clemantis.
“How pretty. How full of nature my garden is…”
How many times had he thought that very thought?
Many times, he was certain.

The sun’s rays lit upon his face. He smiled, feeling comforted by the sun’s warmth.
Suddenly, in the open field on the other side of the babbling brook, he could see a huge baboon- driving a front end loader with its blade fully engaged in the “down” position, flying across the field towards his little cottage, beyond the row of hollyhocks at the south end of his garden. The contraption travelled at break-neck speed, ripping up grass and trees- even the row of hollyhocks, as it crossed the babbling brook it lept skyward coming to rest right on top of the turquoise-blue lounger where Dorik the troll lay reclined on this sunny morning with his cup of “mossy bark” coffee.

Now a final word from the author…

"Pardon me?"- you say.
"What’s that?"- I say.
~mumble, mumble`
"Oh, I hear you."- I say. "I hear you asking ever so politely-
“So, what happened to Dorik the Troll?”- you say.
Well, poor, sweet, adorable, well-rested Dorik was squashed flatter than a pancake on the breakfast menu at the Golden Griddle.


On another much happier note-
Didn’t that “mossy bark” coffee sound delicious?
Posted by Rob Reid at 9:28 PM