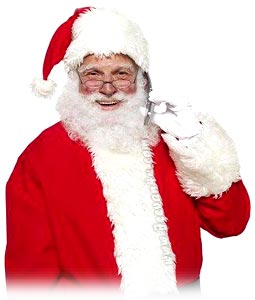 It’s me, Virginia. Crummy picture eh? I wasn't ready when the photographer clicked the shutter.
Goodness!

After reading your letter yesterday and sending my reply I got to thinking. That’s something I do quite a bit of these days.
I am retired now… look at that! Me telling you what I am doing.
You know that don’t you?
You know everything- don’t you?

Of course you do. The Internet and e-mail must be an absolute “joy” for you. How it must simplify things at the North Pole.

Now, just in case you have me confused for a minute with another Virginia (although honestly how could you?), I’ve taught school for darn near 40 years. I retired a few years ago but I am still quite active in many things.
For instance, I pay piano for a local chorale group and I have been asked to pay on occasional for one of our local theatrical groups.
I get a real charge out of that- to be sure!

My husband Bernard is a retired “Postie”. That’s right he delivered not only children’s letters to you but letters you wrote back. He always considered that task to be one of the most important things he did throughout the year!

We both still love “Christmas”- in a kind of non-secular way. Bernie and I don’t associate or identify ourselves with any organized religion but we have a keen “spiritual” side to our lives and we love to commune with nature- especially in the summer when we hike, swim, boat and play tennis.
Yes- tennis!
Our lives are very full indeed.

We collect goods and organize shelves for our local food bank and this time of year we delight in serving up turkey dinners for those less fortunate. Why on Christmas Day we’ll be helping to feed a Holiday Dinner to 300 local citizens who are alone or are just not able to afford the trappings of a real Christmas Dinner.
Our hearts shine and our spirits soar for days afterwards.
We try to save some of that “spiritual” lift to last us the entire year through.

Our son and daughter have families of their own now. Sophie- our daughter who is a teacher just like her Mother, met and fell in love with a guy named Bill about 10 years ago. Bill’s a banker and they have two kids- Randy 8, and Mark 7. We love those two guys to bits.

Not to be outdone, our son Timothy and his Husband of 15 years- Harrison, have three kids- two beautiful girls Sasha 10 and Virginia 9. Yes- named after me! They also have a son Trevor, who just turned 13 and starts High School soon.
A real Teenager! He’s a Golf nut too and goes out to play nine holes with his Grandfather when the mild weather allows. Timothy and Harrison own five décor and home stores called “Aplomb”. They are very successful business men- as well as family men!

We love being Grandparents and love Christmas with our Family members. Somehow we manage to share all the kids with the other Grandparents and more often than not, we all get together.
We almost need to rent a hall! 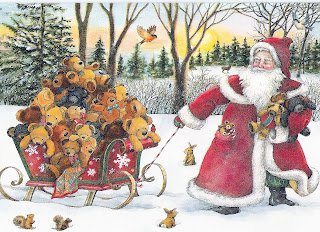 I have a lot of wishes this year Santa. Oh, none that you could stuff into that big “magic” bag of yours and carry down the chimney but wishes with a much broader spectrum than my own immediate family.
For instance,
Could you bring some peace to Mrs. Berkshire who lives next door? Her husband passed last year and she’s having a rough go. Her family is near and Bernie and I invite her over for dinner and a movie when we can.

Now, about those boys and girls in Afghanistan. Could you try to place a “force-field” of safety around them and those they are protecting? It seems that God doesn’t care much or has forgotten them along with the people who live in that part of the world.
Oh! Look at me talking as if there was even such a person as God.

She or He is really more of an idea actually- isn’t that right?
It’s a feeling. A “Grace”. A quietness.
Just not a person.

I always say to Bernie if folks would take all that energy- as well as all that money, they give to those houses of religion and funnel them towards peace, togetherness and happiness, our short stay on this planet would be more of a kinder, gentler nature.
Wouldn’t that be grand?

Could you also help the “right” to not tarry too far in that direction? It just breaks down a lot of things that only have to be built up again when they falter- and they will- falter.

I hope you also take a moment to relax during this Holiday Season. Oh, I know that’s not even possible until Boxing Day but take some deep breaths during the next few days. I know the Elves and Missus Claus help get you through. I hope she received the red scarf I found up at Winners and sent to her a week ago. I know it’s her favourite shade of red and I just couldn’t resist.

Thanks for lending an “ear” Dear Santa and if I don’t hear from you before the Holiday gets into high gear- all the best- and to yous and your team a “Good Night!”