Out in the Barn Part III- Summer Sausage

It was Helen from housestall twenty-two.

“Such a handsome human. He was quite the looker in his day-wasn’t he?”- says Lilloweth.

“I suppose.” Helen sighed. “If you like that type of human”. Helen’s gaze was taken away to the north end of the barn where Farmer Frank was pitching fresh hay into the stalls. His forearms were bulging.

Betsy noticed her heavy sigh.
“Why Helen, I declare you have a thing for Farmer Frank and at your age too!”

“She has a what?” Lilloweth shut off the television and the Blue Ray player. “a crush on Farmer Frank?” 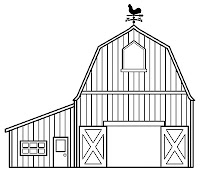 Helen was a little bit embarrassed. She looked at the barn floor and raising her head slowly said- “I’m not sure it’s a crush Lilly, it’s more of an appreciation for humankind. Just look at those brawny arms. See how strong Farmer Frank is? Why it’s as if he’s heaving nothing at all!”

“For goodness sake girlfriend. Get a grip. Yes of course we all think Farmer Frank is nice.”

“Kind too.”- Lilloweth added, “Most kind. Why he even bought me this lovely TV so I could watch my movies.”

“That’s right!”- says Betsy. “Now just how many farmers would do such a thing?”

“Oh I know he does all these kind things girls but...” Helen stopped mid-sentence.

“But. But. He still is a very handsome man and I just like to look. Why remember last summer when we were sprawled under that big old tree down by the swimming hole on that very hot summer afternoon?
The girls nodded.
“When all of a sudden along comes Farmer Frank.”

“Oh yes, I remember. He was clad in just a pair of little red bathing trunks.”-says Lilloweth. “He was just so darn handsome and human.”

“He was and do you remember what he did gals?”- Helen looked back and forth at Betsy and Lilloweth.
The gals shook their heads no.
“Well Dears I do. I remember only too well. He stopped at the big rock at the edge of the pond and looked this way and that.”
Helen demonstrated.
“Then he rolled those little red trunks down his belly and hind legs, crawled up on that big old rock and jumped with all the gusto he could muster right into that cool water!”

“Oh yes. It was quite the splash!”- cried Betsy. “Now that I think of it, Farmer Frank was the picture of athleticism that day! For a humankind at least!”

“Oh mooore than that!”-Lilloweth bellowed. “I remember thinking for a human, he was quite moovelously…”
She stopped for a moment and started to giggle. Betsy joined in.

“Girls! Girls! Get a grip!”- Helen was trying to hush the girls for she was certain that Farmer Frank would wonder what all the commotion and cow-giggles were about.
“Ladies!” Helen brought a hoof to her lips and motioned to Betsy and Lilloweth to be quiet. “Now, I am serious here. Keep your voices down. My goodness! What if Farmer Frank heard you cackling like a little schoolcow?”

Betsy gasped for air and through bovine tears of laughter she cried- “Helen do you remember what we all saw when Farmer Frank lumbered out of that pond that hot summer afternoon?”

Helen looked perturbed. “Of course, I remember Bets!”
She tried to keep a straight cowface. “We all lay there under that big old tree and when Farmer Frank came out of the water we all saw..?

“Yes? What did we see? Say it Helen!”- Lilloweth prodded her to tell the story. 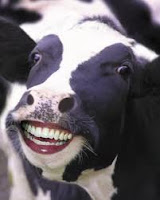 “Helen continued. “We all saw him in the most humanist…”

“Yes! Humanist and…?? ” Betsy and Lilloweth could barely contain themselves.

Helen looked up the housestalls at Farmer Frank who was still pitching hay and said-
“Oh Girls, I’ll say it then. We saw his big human weenie!”

Betsy and Lilloweth dropped to their knees and started to laugh so hard they could barely catch their breath.

“Now stop it you two. You are terribly bad. Look. Hush up or Farmer Frank will throw down his pitchfork and come see what the trouble is!” Helen’s tone was firm. She tapped her hooves on the housestall floor.
Eventually Betsy and Lilloweth contained their laughter. Lilloweth spoke.
“Oh Dear Helen. That was quite a site to be sure. Why even the bulls were speechless. Who knew that human males could sling such sausage!”

In a brief second Betsy and Lilloweth were drowning in laughter once again.

“You two are just too much. I’ll see you both later when you have reached a certain level of decorum- for ladies of your “milk” that is.”

Helen sashayed away to her housestall. If she could have blushed, she would have. Her heart beat just a little faster too. As she turned into her housestall she grabbed another quick glance towards Farmer Frank and smiled sweetly.