Today on ROBBLOG- Movies to miss…or watch if you haven’t anything better to do like tweezing your nose hair.

MacGruber comes to the big screen from a short sketch on Saturday Night Live to a full-blown, corny movie. Nice to know that there’s money around for this stuff. Really, not very funny at all. Cunth (that’s the name of the bad guy) and Dick jokes abound.

Why anyone would think that MacGruber (Will Forte) making loud, grunting sex noises just before he orgasms is funny- only God knows or the Director. A bright spot in the movie- besides Kristen Wiig, is that good looking guy- Ryan Phillipe. In one scene Phillipe’s character mocks an earlier scene that had MacGruber fully naked with a piece of celery stuck up his behind. It was supposed to be a distraction for the bad guys.
It was.
Unfortunately, it was a distraction for the audience as well. 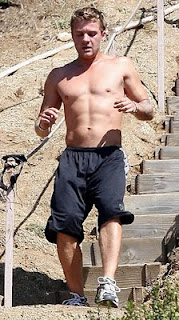 Eventually, Ryan is naked from the waist down. It’s quite a shame he’s not totally naked like MacGruber was earlier. He must have had an “I won’t take off my shirt in any scene in this movie”, written into his contact. It would have been the lone bright spot in an otherwise ho-hum film. The huge piece of celery stuck between Ryan’s butt cheeks is kind of cute though. The celery had a leafy top, just like the kind of stalk you’d use in a Bloody Caesar. He either laughed like Hell filming that scene or cried silently in his trailer after the shot was complete. There’s Ryan with celery sticking from his arse and his man-jewels cupped in his hands watching his career gently fade away.

It’s not a bad demon movie, really. A little, old lady casts an evil spell on a young, blonde loan manager who is looking for a promotion within her bank. She makes a decision to not approve the loan to impress the bank manager. It backfires and the old lady casts away. She’s kind of engagingly annoying but God her teeth are disgusting. She probably smells and has nasty, yellowed chipped fingernails.
Nice touch. Yuck!
A lesson for all those loan managers and officers in banks who turn down loan applications to borderline customers: You might just get cursed and forced to eat a bucket of live maggots or get covered in blood and guts, if you refuse a loan. Especially to a little old lady that just happens to resemble a demon from Hell.
I’m just saying…

There’s even a corpse rolling out of a coffin at a wake that the loan officer just happens to crash when she’s looking for the old lady to tell her she has the loan after all.
Awww, isn’t that nice of her to reverse a decision?
The pretty little loan gal hopes the horror of the curse will end when she grants the loan.
She’s too late however.
The old lady has snuffed it.

So, the loan gal walks into a wake at the old lady’s house and just happens to stumble into the coffin, knocking it to the floor. The blonde loan arranger falls to the floor too. Of course, the corpse rolls out of the coffin right on top of her, leaking dark, green muck from its open mouth right into the cake hole of our heroine. Not a lot of laughs in this one.
Sounds like a typical Charlie Sheen night out, doesn’t it?
You’ll not eat guacamole for a week after this movie.
There’s a lot of “eek”!

Finally, a movie called Stonehenge Apocalypse from a Canadian Production company aligned with Corus, The Movie Network and Movie Central. Now, because there’s some Yankee Dollars (Movie Central) in the mix, the story has to be an American one because the producers haven’t the guts to set at least part of the movie here in Canada. There’s also this idea that American audiences won’t buy it. That’s part of our Canadian inferiority complex we’ve apparently had for decades. What’s hard to take is the fact that you can plainly see it was filmed in B.C.- even the Stonehenge bit that is supposed to be in England.
Overall however, it’s probably a good idea that we’ve been left out of this movie’s plot.

Here’s the end of the world coming as a result of electro-magnetic shit seeping out of the pyramids in Egypt, from Stonehenge and another Egyptian pyramid that’s buried somewhere in a New England farmer’s field. This latter pyramid eventually rises from the bowels of the earth and takes up space in the middle of an empty field.
Nobody notices. At least not the media or the neighbours. It’s pretty much like any other Thursday.
I say that because it just felt like a Thursday.
Don’t ask. It’s too much to unravel. 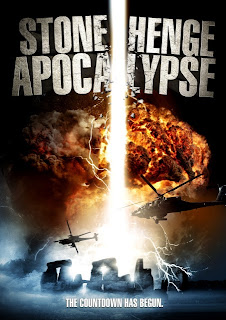 There’s also this US General too who seems to control the outcome of the world’s partial demise with a handful of army guys and a couple of jeeps. This part is laughable and the guy couldn’t act his way out of a 97 cent re-usable Wal*Mart shopping bag. He has the blessing of “World Leaders”, so he orders in a jet to drop a nuclear bomb on Stonehenge to stop all the insanity. The bomb is dropped- I’m talking about the one from the jet not this movie- but doesn’t quite make it to the ground because these electro-magnetic charges coming from Stonehenge make it disappear into thin air.
Yup.
There are just so many things wrong with this movie but it’s interesting to note that once again someone somewhere has money to produce this crap.

So, there you have it. Three flicks to look out for on the Movie Network or your On-Demand service.
Ratings?
In order of bad to worse.

Drag Me to Hell.

Maybe you should just tweeze your nose hair instead…
Posted by Rob Reid at 9:43 AM