Trying to get involved in the community and be a "True Islander". I have finally figured out- I think, why I still feel a little funny living here in the Cowichan.
I mean funny in a sense of trying to feel settled in my new city.
Grounded.
People have told me it will take a year or more to feel truly "at home".
I believe it.

There has been a lot up upheaval in the past year for the Husband and I. Just go back to blogs in mid-August and read about how we felt leaving "old home". I am not regretting this major move or looking backwards but still, the words to describe how I feel some days would include these:
unsettled, confused, disconnected, lost, floating.
Remember too, as of February 23rd, the Mister and I will be Islanders for 6 months!

I have described this process of cutting the "Ontario Apron Strings" similar to the way the lift locks work in Peterborough, Ontario. If you are not familiar with the Lift Locks- Google them.

Picture us- The Mister and I, as the right pontoon in the upper position. As we left Orillia behind the pontoon starts to go down. We travel across Canada and get to the Island.
Pontoon goes down more. The Island pontoon- the left one, starts to raise.
We get on the Island and eventually move into Palm Villa.
The right pontoon- that's Orillia, goes down a little more.
By Christmas the right pontoon is almost level with the left pontoon that is slowly creeping up. The left pontoon- the Island pontoon, is Duncan and the Cowichan as we start a new life.
We figure out streets.
Meet people.
Get a new Dentist.
A Vet.
A Chiropractor.
The Duncan pontoon moves up a little more.

Now the new year is almost two months old and the left pontoon- Duncan, is above the right pontoon- Orillia.

Are you following this?

As time moves on we are leaving Orillia behind. The right pontoon edges down.
We are not hearing from as many former friends and family members as we first did.
I am trying not to go on about the temperate Island weather in phone calls, texts or e-mails. It is probably pissing people off.
I know it is...especially with the photo a week ago of Tom cutting grass in shorts. In February!
I don't mean to piss people off. I just want folks back east to know there is another option besides bone-chilling temperatures and mountains of snow. I have made an "End-of-February" resolution to lay off about the weather and how wonderful things are here in the "Canadian Tropics".

In place of former friends and family back in Ontario, we are making new friends and bonding with a "new" kind of family here in BC.
The left pontoon moves up...

As I said back at the top of this ROBBLOG, I am trying to get involved with this community. I have volunteered to be the secretary/assistant for two adjudicators during the Cowichan Music Festival. A festival like the Kiwanis Festival back in "old home". It's been fun and I have met some new people.
Tom's been coming along as well to shake hands and meet "new" folk.
Look at us!

I must admit, I am starting to chip away at those words like "disconnected" and "floating".
I am even having thoughts of resurrecting Double R Productions Theatre! I still have a lot to learn about the theatre community on Vancouver Island but it seems to be a diverse and active one.
I need more contacts before I can proceed.
I wonder-
Can Sister Mary Margaret entertain an Island audience?
Gawd help us and these Islanders- maybe even Hank??
Would Ernest and Sadie Flynn be made welcome?
What about Lady Wyndemere and her Fan?

I don't really know how it will all turn out but I am starting to gather information and think about the whole process once again. 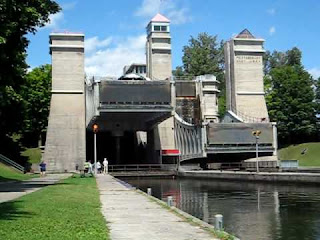