Over the weekend I was trying to think of a way to say something nice about “something”, when I didn’t really mean what I was actually saying but really quite the opposite. Follow me?
I was simply stuck. I didn’t not knowing how to phrase something nice about something that wasn’t. So, instead of hurting my poor little brain, I turned to the Net and decided to do a few searches. I used such phrases as:
How to say kind things to somebody when you mean the exact opposite.
How to say something nice when you really don’t mean what you are saying.
How to say nice things when you don’t mean it.
How to hide what you really feel when you say something that sounds nice.
I got some ideas but nothing I could use. However, I came upon a few things you may or may not want to say while having a one on one conversation with say- Atilla the Hun- or even Stephen Harper. Read on and please do not attribute these phrases all to me. I am simply passing them along as let’s say- a “Public Service”.                                                            Here they are:
Any similarity between you and a human is purely coincidental!
Anyone who told you to be yourself couldn`t have given you worse advice.
Are your parents siblings?
As an outsider, what do you think of the human race?
Calling you stupid would be an insult to stupid people.
Do you ever wonder what life would be like if you`d had enough oxygen at birth?
Do you still love nature, despite what it did to you?
Here`s 20 cents. Call all your friends and bring back some change!
I`d like to see things from your point of view but I can`t get my head that far up my ass.
I could make a monkey out of you, but why should I take all the credit? 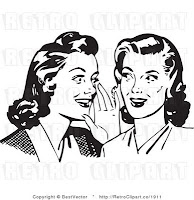 I don`t know what makes you so stupid, but it really works!
I hear you were born on a farm. Are there any more in the litter?
I`d like to help you out. Which way did you come in?
I`ll never forget the first time we met - although I`ll keep trying.
If I stand close enough to you, I can hear the ocean.
I know what you’re thinking. Some of these are downright nasty. So, compromise.
Just say them quietly to yourself when you’re in the check-out line at the grocery store and there’s someone in front of you who is having a hissy fit about the price of the dill pickles.
Use them when your friendly neighbourhood Jehovah’s Witness comes to your door. It might even work on the Mormon Boys but then again they are usually so angelic and un-worldly that they wouldn’t get a good “toss” if it hit them smack on the top of their pretty little heads.
So there they are. A few nasty little things you might get away with repeating- if you plaster a smile on your face or add “Bless your little heart” after saying each one.