Sometimes I can be a right little bleeder!

Here name is Marion Cox.
What an individual!
If anyone were to be chosen to sing in the Angelic Choir way up there- or be a “model” Angel- soon after passing St. Peter at the Pearly Gates, it would be Marion.

When you live to be 90 years of age, friends and family are at a premium. Many have passed on. Many are lost in the cracks of time.
It was a shame. Only about a dozen people paid their respects.
I chatted, laughed and told stories with people I hadn’t seen nor heard from in 40 years.
I never thought I would be old enough to say that!
I even spoke with Bill. A guy that I had once considered to be a “hunk of a man”- at least in my memory of 40 years ago!
However, just not today.
Sorry Bill.
For a guy who had “stomach abs” before “abs” were even popular and arms the size of Dwayne Johnson’s, today proved to me what 40 years of neglect can do to a guy. Oh the arms looked to be still bulging beneath his sport jacket but the jacket was also covering a large bit of a “late-in-the-mid-life-gut”.
He still looked pleasant enough- in his face.
God, I remember how he looked in a Speedo Swim Suit swinging from the rafters in a men’s change room, on the beach at a friend’s house. 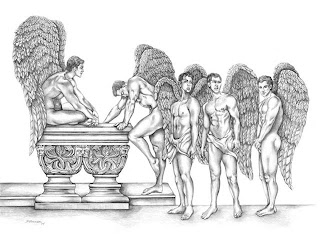 To be truthful, I saw him “without” the Speedo too. Very impressive as I remember- and I do! His brother was no slouch either in the handsome department- but just not as well “put together”.
But, Rick was nothing to sneeze at either.
It was all a question of size- and not what you think either!
It was Rick I had actually expected to see today but he didn’t show.
After the 2 hours of “viewing”, we were encouraged to stay for the wake.
No beer and pretzels but there was a sermon and praying and Catholic liturgy from a Catholic Deacon- who told us he was married.
I don’t know why. Something about getting home to the “little woman”.

Although I don’t believe all the mumbo-jumbo for one prayerful moment, I stayed for Marion. About a half dozen of us did. Most sat quietly. One mourner even repeated the Catholic rhetoric with the Deacon.
Most only rolled their eyes.
When the Catholic Deacon finished connecting us to Jesus- he had a direct line it seemed- or believed, he asked for us to speak individually.

I went first. I guess I kind of started the show rolling, saying to him:
“Tough House- eh? I’m in theatre and I know. It’s hard to perform when you don't get the laughs!”
Ooops.
Did I stop there?
No. Of course not.
I continued by saying I neither believed in God nor Jesus.
Geeze, don't I love to stir up shite!

I find that in cases like this, the "person in charge" never knows what to say.
I think they say to themselves- "Whuck? A Non- Believer in the crowd. Damn Not on my watch!”
Anyway- at one point, I thought he was going to throw a crucifix in my face and drench me in holy water.
His face "ticked". His eyes did not twinkle. His dimples were not so merry- or Joseph. I think he thought I was the devil and he was being tested.

Then he said to me- “Well we’re not talking about that, we are here to talk about Marion now!”
Well, what was I a dummy? I could see the casket. It was right beside him. So I continued-
“I know.”- I said. “I want to tell you, after an entire life on earth, Marion can finally be who she really is and could never be in this earthly life. She's peaceful now.
She has earned that right as she passes on to the next level.”

He just stared at me. The right side of his lip started to curl up- ever so slightly at the edges. It quivered.
All in a day’s work- I thought.

Have a happy Marion and may a Flight of Angels carry you to your rest! 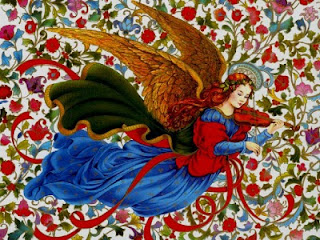