Uh Oh. It's Part V of Out in the Barn.
Read on MacDuff until Burnham Wood come to Dunsinane... 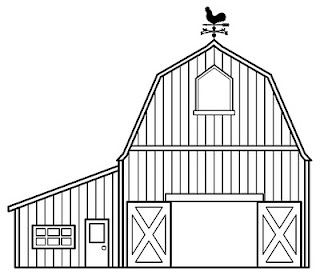 “Lilloweth!…”- Betsy called out to her friend next door.


There was no answer. She tried again.
“Lilloweth!” Are you there?
Still quiet.
“Darling, if you’re expecting her to answer you- she won’t. She can’t hear you. Helen- her neighbour up the stalls, poked her head through Betsy’s doorway.
“Why can’t she hear me, Helen?” Betsy set her Cow Digest Magazine down on her coffee table and sashayed to her doorway.
“Have a look for yourself Betts Dear.”- Helen took a step or two backwards to allow Betsy to swing her ample rump out the door and into the centre aisle of the barn.
“For Goodness Sakes!” She cried. “Just what is that gal up to now?”
“You’ll see”- said Helen with a grin. 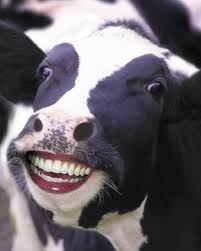 Betsy peered through Lilloweth’s open stallway.
“Oh for …well, I should have known.” Betsy had to laugh.
Lilloweth was sprawled out on her cowcouch. A bowl of popcorn at her side and a pair of the biggest headphones over her bovine ears that Betsy had ever seen!
“A picture is worth a thousand bags of feed Dear!” Helen batted her huge brown eyes and looked into Lilloweth’s House stall over Betsy’s left shoulder. “She is a gal of the times you know Betsy. She’s so technically advanced than any of the gals along the way.”
“But headphones?” cried Betsy. “Why on earth does she need headphones? It just cuts her off from the rest of us.”
“Well Darling, I asked her that this morning. She says it’s amazing the extra sounds one hears. The tenderness of the violins, for example. The gentle swissh of a pair of brooms on a snare drum. Oh My Dear, she went on and one about the darn things.”
“But what if I needed her or there was a need to evacuate the Barn. How in Ferdinand’s Name would she hear us? Betsy was concerned.
“I do not know my Dear. I do not know.” Helen shook her head. “Perhaps we should grab her attention and ask for an explanation.
“A very good idea, Helen.” Betsy stepped further into Lilloweth’s housestall and gently touched her on the shoulder.
Lilloweth seemed startled for a second, then, she turned around to see Betsy and Helen standing just a few feet from her couch.
“Oh My Goodness!" I was so lost in the music that I just didn’t hear you girls come in!” Lilloweth had taken the headsets from her ears and placed them on the coffee table right next to the popcorn. “Come on in you two. I want to show you my new headphones!”
“I saw them this morning.”- Helen said.
“Of course you did.” Liloweth turned to Betsy. “Look Betts my new headphones. "They just arrived by  Canpar yesterday." I can’t believe how wonderful they sound- wanna hear?”
“Not right now.” Betsy plopped herself down on a big bean bag chair. Helen stood next to Lilloweth’s fireplace, warming her back and sides.
“So what’s cookin’? Lilloweth looked at both gals and smiled.
“Oh, nothing much Lilly. I had just called over to you to see if you wanted to take a little stroll and you didn’t answer my bellow. That’s when Helen here was strolling by my cowstall and told me to take a peek in your place and I’d see why. So I did and well…”
“”Gee, I am sorry Betsy. I was just so wrapped up in my music, that I didn’t hear you- obviously.” Lillooet seemed to be truly sorry.
It was Helen who spoke next.
“Listen Dear. I am just a little concerned that you block out the rest of the world when you wear those things. What if we really needed you or there was a barn emergency or something and you couldn’t hear us call to you?”
“What kind of an emergency?” Lilloweth’s interest was piqued.
“Oh I don’t know. Maybe a juicy piece of gossip was being bantered about and you’d have to hear it second-hand.” Helen knew that what she said was a pretty weak argument.
“Betsy gave Helen a stern look and turned to Lilloweth.
“Lilly, it’s just that you need to be aware of what’s going on around you, that’s all. Maybe you could turn down the volume some or maybe keep the headpiece a little ajar on one ear.”
“That’s a great solution. I’ll just keep a portion of my left ear free. Maybe I’ll give you a holler Betts when I have them on and you’ll know that I may not hear you call me the first time at least.”
“Well I guess.” Betsy decided she could live with that plan. "So what are you listening to anyway?”
“Yes!” Helen broke into the conversation as she turned her backside towards the fire, “Just what are you listening to?”
“Tommy Hunter!”- was Lilloweth’s reply. “He is such a dreamboat!”
“Good Night Nurse.” cried Helen. “Look. My programme's coming on. I’ll talk to you Ladies later. See ya Dolls!”
Helen ambled out the doorstall.
“So you want to take a stroll Lilly? It’s such a nice spring night.”
“That sounds nice and then we’ll come back and I’ll make us both a nice cup of hot coca. Oh! I made some peanut butter cookies this afternoon.”
“How’s a gal supposed to keep her figure when you’re always cooking up treats?”
They both laughed and left Lilloweth’s Housestall with a swoosh of their tails and some hardy tee hee's.
Posted by Rob Reid at 9:29 PM