So the old Geneva Theatre has had their neon sign refurbished.
Yeah!
The sign- from the 1930’s, has been a part of the Downtown Orillia landscape for decades. It’s just that the colourful neon bars haven’t worked in more than twenty years! When the Geneva was an art deco film house- where as a kid I saw so many classic films, it gave West Street South a “big city” feels. On hot summer nights the sign seemed brighter.
More imposing and important. Comforting and special because beneath that huge sign all the big film starts- and some not so big, from around the world would be inside.
Up there.
On a true silver screen.
Back a few years ago, great damage was done to the Geneva Theatre. The ceiling was lowered and apartments now inhabit the upper floor. I am surprized as hell they didn’t rip it down long ago like the old library. Not that monstrous white addition. I mean the original old Carnegie library that was hidden underneath. Now we have that big piece of glass and steel crap designed by some hoity-toity architectural firm who didn’t have a whore’s chance in heaven of capturing the essence of the Downtown, let alone Orillia’s cultural and heritage past. Enough on the library- for now.
I was last inside the Geneva a few years back for the Festival of Trees.
It was sad.
So was the festival of trees as I remember. 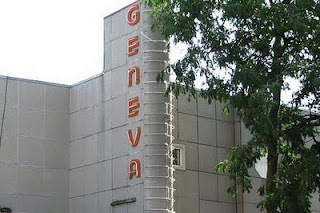 The small stage where the screen once hung was still there last time I was inside. However the soaring ceilings were no longer visible. In the place of space, just a fake, low ceiling covered in ugly, white ceiling tiles. I hope those doing the reno will make those tiles disappear.
I had this idea that the theatre could be used both as a “live” theatre or a film theatre, showing classic films.
That’s me.
I always have the big ideas but no big bank account to follow through. Imagine seeing classic films on a big screen the way they were meant to be seen. A cup of Columbian coffee- or fancy coffee if you so desire. Maybe a muffin or a decadent chocolate desert, while you watch the movie.
Then, a few evenings later, envision a small stage with tables on the floor set for dinner patrons who would be there to dine and then watch the show. The tables and chairs would be scattered about the room. The theatre seats would magically disappear behind the walls.
Snap!
Wake up Rob!
Oh my Gawd!
Such a dream!
A nightmare really because bingo still makes it home in the former movie palace. Maybe the renovation will be so well done  the company will offer the space for special events. I wonder if there’s a kitchen?
So, the next time you drive down West Street South in Orillia past the Geneva, try to look up and take a gander at the Geneva sign.
Do it safely too.
I believe it gets “lit up” on Tuesday, September 13th.
It’s worth an evening stroll, south to West Street
Posted by Rob Reid at 9:02 PM