Good Lord!
After eight centuries some artsy guy sees the face of a devil in a fresco painted on a basilica wall in Umbria- in Italy. I looked at the picture and couldn’t see it at first. Now, that’s all I see every time I look at the fresco.
It’s kind of a nasty devil too. Horns and everything. Right there beneath an angel gowned in a flowing white robe. The fresco was painted by Giotto. Officials are studying the fresco for clues as to why the devil’s face is there.
Oh for pete’s sake!
Giotto had a sense of humour. He was probably forced into painting the fresco all in the name of Jesus. Maybe he’d have rather be fishing but some priest insisted he paint it for the Glory of God. So- and I am just guessing here, to escape the wrath of the church and the ultimate fate of being whipped, burned at the stake or otherwise tortured by the loving, accepting, non-judgemental Christian Church, he just grabbed his brushes and a few buckets of paint and created the fresco.
It’s quite a pretty little thing. There are a group of angels encircling St. Francis of Assisi at the top of the fresco and a gaggle of priests beneath- one of them holding a black object that resembles a top hat. Maybe he’s going to pull a rabbit out of it! That’s why everyone is gathered around. Just for the entertainment value of a moment in time. 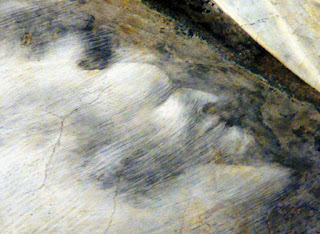 St. Francis of Assisi is actually the name of the basilica too- Basilica St. Francis. Imagine it’s been there all this time. Oh. Probably a curious child or two centuries ago has said-
“Look Mummy! It’s the Devil in the clouds, right there by that angel!”
“Nonsense, Dear. It’s just a cloud- or something…” His mother would say.
“The child cried out- “No Mum. It’s more than that. Look at the horns and the big chin. It’s the devil for sure!”
“Young man!” Mother was angry now. “You’ll go to bed without supper and no fresh straw on the floor of your bedroom tonight. You’ll sleep on the same old urine-soaked straw that’s been there all week….and No Television either!”
“Awww Mother. That’s not fair!”
“What’s not faire...” She grabbed him tightly by his right arm- “What’s not faire is you blurting out some devil talk in front of everyone in the village and in this basilica too. Why what will people think of our family We have a son who sees the devil in paintings?”
“But, but…” He tried to make another point.
“Hush child or I’ll shove a red hot poker up your ass! Then we’ll see how many devils you see up there in that picture. Imagine a son of mine seeing devils and such. Why I should just march you right up to Father Bumwhistle and let him have ago at you!”
The boy stopped squirming. Looking up into his mother’s face he said softly- “He already has…”
The mother paused for a second, then said- “Oh look. There’s Mrs.Busybodie. I must have a chat with here about the church supper. Now you go straight home and straight to your room young man.”
She left the child standing alone in front of the fresco. He looked up at the devils’ visage in the cloud in the fresco one more time- and smiled.
Posted by Rob Reid at 9:48 AM