Cripes!
$7.75 for a sausage on a bun!
$5.19 for a regular serving of French Fries
Water $3.59
$7.75 for a foot long hot dog
Cheeseburger, fries and a drink- $14.69
Parking $12.00
Then, there’s the admission to pay.
You see, we made a pilgrimage to Canada’s Wonderland on the weekend. We were actually supposed to be there two weekends ago when it was “Gay Day” all in aid of PFLAG- Parents and Friends for Gays and Lesbians.
We got stuck in traffic on Hwy 11 and 400. It took two hours just to get to Cookstown. When we pulled off at the Cookstown Outlet Mall, the skies looked threatening. We had already driven through a huge downpour at Barrie, so we had a burger at Harvey’s and turned around and headed for home. This past weekend’s drive was much faster. A small slowdown from Innisfil to just past Hwy 89, then it was full speed ahead.
We had bought tickets online and they were good until October 31st. This past weekend featured perfect summer weather, so we made an afternoon of it. As you can see from above, it’s not a cheap visit. We did have a regular tub of fries at $5.19 and a Dairy Queen cone $3.89- about the same as the Dairy Queen in town. We had taken water through the gates with us. I thought the security guards would take the water from us. They checked our “murses” but said nothing about the water I held in my hand. That was good. We would have spent an additional 4 bucks on water too.
The security checkpoint resembled security at the airport.
What were they looking for?
A Bologna sandwich or two?
Canada’s Wonderland rules still frown on food being take in and consumed on the immaculate grounds. However, families can exit the park and sit on the grass outside or under a pavilion provided just for that purpose.
The park is non-smoking too- for the most part. For those needing nicotine fix there are several spots where smokers are actually corralled behind a fence where they can puff to their heart’s delight, fowling the sunshine-filled air. The second hand smoke still drifts onto the walkways as you pass by but its way better than having a smoker puffing in your face as they walk just in front of you.
The rides were all testaments to the marvels of technology and although we didn’t ride any, we did thrill at the absolute “hugeness” of most of them. Actually, I did take in one ride- The Coca-Cola Oasis. One steps beneath a huge red and white awning where clouds of cool mist and droplets of H20 fall from the structures top and sides right onto your hair, face and extremities! It was exhilarating to say the least- and not the least bit scary!
The park was choc-a-block full of people.
As we walked from one section of the park to another, we began to think it was the “unofficial” Big Shoulders and Big Arms Day. Good Lord, there were dozens of men with some of the broadest, brawniest shoulders we had ever seen. One after another they passed by. Some had removed their shirts after being on rides that soaked their clothing right through to their tanned, hirsute flesh. 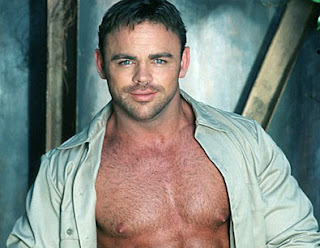 ﻿
There were “shoulders for days”, huge bicep muscles and tight pectorals protruding through tight tee shirts.
Maybe it was just for us?
It certainly was as much a marvel to behold as the technology of the rides!
Yes.
I am a bit of a tramp but remember my husband was just as busy pointing the men out to me as I was to him. It was a pleasant game to play on a hot, sunny afternoon.
We covered the park from one end to the other with the exception of “Kiddie Land”. One look there and we said- no thanks!
It was walk-to-wall kids.
Who would have guessed?
Even though it was a brilliantly sunny and hot afternoon- 27 degrees, the water park- much to our chagrin, was closed for the season. We couldn’t even sit beneath a shady tree for an hour or two and indulge in the pleasurable pastime of “ogling” the guys in black Speedos swishing down huge water slides into tepid pools of turquoise blue water.
There were only one or two “live” shows- although we didn’t take one in. There wasn’t even a single “cast member”- as the employees are referred to, strolling around the park- in or out of costume, singing or juggling or tap dancing. No tall, lithe divers with perfectly tanned, muscular bodies either, flailing themselves from atop Wonder Mountain into the churning water below. That attraction had ended on Labour Day.
Hmmm…
Maybe that’s why there were all those broad shoulders, big arms and chests populating the landscape instead.
Just for us!
I mean, we had to have something pretty to look at!
It worked out very well actually.
Quite well indeed!
Posted by Rob Reid at 9:14 PM