Mathew Shepard would have been 34 this year- had he lived a full, long life.

He didn’t of course.
He was cut down in the prime of life at age 21.

You probably remember how Mathew died but if you don’t let me refresh your memory.

The unspeakable events began in Wyoming on October 7 back in 1998. Shortly after midnight two young men who went out of their way to lure Mathew from a bar, took him to a remote area- east of Laramie, Wyoming where he lived.

The men Aaron McKinney and Russell Henderson tied him to a split-rail fence and assaulted him. He was beaten roughly and mercilessly and left to die- alone, under cold Wyoming skies.
Why?
Because he was Gay.
A happy, smart, young Gay man with his entire life ahead of him.
What might he accomplished?
We’ll never know.

Mathew was found by a cyclist- who initially thought he saw a “scarecrow” tied to a fence. This was 18 hours after his attackers left him for dead.
Mathew Shepard passed in hospital a few days later on October 12 at 12:53 a.m.

You may remember the news stories and the trail that took place over the next year. The lines of hate-mongers with their placards outside the courthouse reading-
“GOD Hates FAGS”
“AIDS cures FAGS”
or
"Matt’s in HELL". 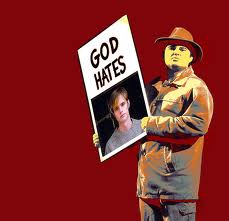 You may remember Mathew’s friends were dressed as “Angels” flapping "magnificent" White Wings as they stood in front of the protestors, creating a calming “wall of white”, while placards waved in anger and hate just behind them.

Why do I remind you about these events from 1998?
I wrote this blog today after watching the CTV made movie- “The Mathew Shepard Story” a night or two back. It was featured on Out TV- Canada’s Gay Network.

It was a tough movie to watch.
I sobbed. I sniffled. I cried. I shook my head in dis-belief.
I just hadn’t been able to watch the movie until now.
It’s already several year’s old.

Have things changed?
In America probably not that much. Although Gays in the Military may be a step forward, being Gay or even saying you were, was enough to keep you out, so why do Gays want to get in?
In 2009 Mathew’s mother, Judy, admits that she’s angrier now than she was at the time of Mathew’s death- because it's still happening. Dennis Shepard says it best- “Ten years of change, no progress.”

Here in Canada there is Hate crime legislation that includes “hate” crimes against Homosexuals.
Problem is- just try to prove that something is a “hate crime”.
It’s not easy.
Two years ago my husband and I had out house attacked by 4 or 5 young men. They peppered the outside of our home with 8 dozen eggs-at midnight one Sunday night in June.
We were called “Faggots!”

Now, this in no way compares with Matt Shepard’s death but it shows you that there are young men out there who want to do you harm- even in good old Orillia, under the cover of darkness.
We called the police and over the next two months the whole thing was eventually dropped by the local OPP Detachment. We never heard what happened in the end. No officer dropped by the house to keep us up to date.
It was swept under the table.
The pictures- yes the police had pictures, of the young men buying the eggs at Foodland are probably shoved in a file somewhere marked “unsolved”.

Now today in Laramie, there is the Mathew Shepard Foundation created by Mathew’s parents- Dennis and Judy Shepard in memory of their 21-year old son. The Foundation honours Matthew in a manner that was appropriate to his dreams, beliefs and aspirations seeking to “Replace Hate with Understanding, Compassion & Acceptance” through its varied educational, outreach and advocacy programs and by continuing to tell Matthew’s story.

There’s more at http://www.mathewshepard.org/
Posted by Rob Reid at 9:38 PM