Elton John a British Citizen who is married- well not married really just in a British sense of union with Canuk David Furnish, is the father of a California baby. You’ve probably seen their happy faces plastered all over several magazines at the check-out counter this week proudly showing off their newborn to the citizens of America. I’ll bet that Palin broad is as pleased as Mr. Harper would be if that magazine was Canadian.
Did anyone else notice that David’s name is not mentioned on the covers?

It’s all Elton. All the time.

Boy, having my name omitted on the front cover- if I were Elton's spouse, of a major gossip rag or two would piss me off big time. Elton would be sleeping on the couch for the foreseeable future- even though technically it wouldn’t be his fault.

Anyway, Mr. John, you see, is pissed off at Americans because of their “back-ass” thinking when it comes to Gay Marriage. He’s on the warpath and wants things made right today- not tomorrow.

A few things here of note.
Why didn’t he marry Mr. Furnish in Canada where Gay marriage- federally, has been around for 5 years?
No second class citizens here in this country-except for reform party folks still clinging to their now defunct party membership cards.

Now just why isn’t this Mr. Elton directing his anger at his British homeland where laws keep Gays as second class citizens. You see “straights” can marry in England. I mean really marry. Same Sex couples- like Elton and David or John Barrowman and his main squeeze, can only have a “union” performed.

No equality there, is there?
You have to shop in Canada for equality- maybe even Spain. 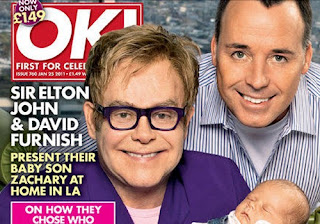 Lastly, I’d like to know how David and Elton get into the U.S? If they declare themselves a family- especially with their new baby, U.S. Immigration should refuse them entry into the country like that Toronto couple- the first Gay couple to be married here at home, who have been refused entry into the States these past 10 years because they told U.S. Immigration officials they were a family.
How dare they, eh?
I talked about this very thing in an earlier blog. Tom and I were told by Canadian officials last March in Vancouver that it was better to “lie” on our U.S. Immigration cards rather than say we were a family. We were told the Americans wouldn’t understand and it would just cause problems for us.
So we lied, like good little Canadians so we could linger under a palm tree on Waikiki Beach in Honolulu, Hawaii.

To make his point about Gay Marriage in Cali-forn- eye-eh, Mr. John picks on the Christians as well as the Yankee government who don’t see things his way. Please note, he’s a little mad. His knickers are in a knot and he may take revenge or at least try to change things in his own demonstrative British way.

Gee, these things take time don’t they?
I mean he can’t snap his fingers- or fire a gun like some Gay Mafia kingpin can he?

Here’ Elton’s words. They sound like song lyrics to me.
“Everyone is entitled to have their own beliefs and their own spirituality. The big difference is that the dogma of the church can be so hateful and divisive. It’s stuck in the stone age. We don’t live in the stone age anymore. The church is losing people left, right and centre because people are fed up with the rhetoric that they’re giving them.”

Like, how many times have I said that very thing about "dogma" in this very Blog. Time will only tell if he’s “big enough” and worthy enough to enforce change. Well the Brits used to own the Americans anyway.
We can’t forget that.