All through our childhood we are lead to believe that faeries are wonderful, woodland creatures with delicate wings made of shimmering, spun sunshine. Their faces are exceedingly pretty. Their smiles- most enticing. Faeries are nice. They love us. They look over us. They care for us. They live in harmony with us.

Many of us believe that faeries live in small, mossy meadows next to hollowed out logs.
Some do.
Many do.
Others don’t.

However, I’m here to tell you that Faeries can be bastards.
Are you surprised? 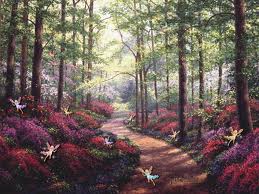 Take last summer. It was a beautiful day when Stanley and Ernest packed a picnic lunch in their favourite wicker basket- the one with the overlapping leather-covered handles and headed off into the meadow for an afternoon picnic lunch. The sun was warm but not too hot. The redbirds were singing in the trees and the crickets were creating a marvellous symphony in the tall grass.

Ernest spread their favourite Hudson’s Bay Blanket on the fragrant grass just at the outer edges of shade, created by the enormous branches of a huge, nearby oak tree growing tall and stately next to a shimmering lake. They had christened the Lake “Bosley Bay” when they first purchased the rural farmhouse property eight years ago last month. Bosley had been their beloved yellow retriever that had passed several summers before.

Stanley carefully unfolded a checked tablecloth and set to work placing utensils and plates on top while Ernest surveyed their expansive property. Two hundred acres of bliss! Stanley decided to leave the chilled potato salad, devilled eggs and cured Saskatchewan Honey-Ham until Ernest and he were both sitting on the blanket, ready to eat. There was no sense taking a chance that June temperatures might “turn” the mayonnaise in the devilled eggs.

“How ‘bout a glass of lemonade and a pinch of London Dry Gin?- Stanley asked Ernest as he reached for the insulated pitcher in the basket.

“Oh yes! Lovely”- said Ernest, “what a perfect start to a beautiful summer afternoon. Say Stanley, how about we take a dip in the pond before we eat?”

Ernest opened up the straps on the little blue satchel he had slung over his shoulder as they left the house and walked over hill and dale to the meadow. Inside were two swimming costumes and a pair of large bathing towels imprinted with the words “Aloha Hawaii- Official Bikini Contest Judge”. They had giggled a good one over those towels when they bought them at that roadside stand in Waipahu, over in Hawaii two years before.

“Here’s your bathing costume Stanley. Now scurry into it you furry little beast!”- said Ernest, his eyes wide with anticipation. He tossed the costume at Stanley’s face. “ Hurry, now. Show us your tits, Dear!”

Ernest’s eyes were as big as a schoolgirl’s in anticipation of what he was about to see.

“You naughty boy!”- laughed Stanley, “Mama’s gonna show you everything. Be patient my Darling.”

Ernest snatched his own suit from the bag, slipped off his beach thongs and peeled out of his shirt and shorts. He folded them neatly, placing them on a corner of the blanket. Then he slipped into his suit carefully pulling it up his long legs, his beefy thighs and up and over his groin- to his waist.

Stanley did the same as Ernest watched him, a smile pursing his lips.
Ernest grabbed his bright red waterwings from the satchel and blew into the nozzel to inflate them. He clamped them snugly about his waist.

“Come on Dear. The lake is liable to evaporate before we dip our toes in it, the time you’re taking”- says Stanley.

Stanley and Ernest trotted past the huge oak and over the small rise to the shore of the small lake.
Suddenly, they heard a tittering in the bushes along the shore to their right, next to a huge hollow log.
The tittering turned to snickering.
Then outright laughter.
Followed by annoying, loud guffaws.

“It’s those bloody Faeries Ernest, that live along the shore by that old hollow log over yonder. I’d know that laughter anywhere!”

Stanley slipped an arm around Ernest’s shoulders.
“We must remember to call the exterminators.”

Then in a blinking of an eye a group of 10 or twelve Faeries stumbled out of the one end of the log.
They laughed and pointed at Ernest and Stanley standing there on the edge of the lake in their bathing costumes- Ernest in his waterwings.
The laughter continued.

Ernest and Stanley spun on their bare heels and proceeded back to their picnic blanket, the Faerie’s laughter filling their ears. They felt very bad the rest of the entire afternoon.

I told you that Faeries can be bastards! 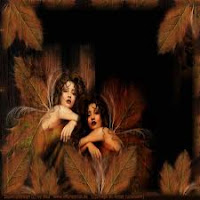