This is a repeat/updated blog I wrote several years ago about the EX.
Enjoy it again.
R*
The Canadian National Exhibition is on. Like the first crocus in the spring announcing summer’s coming, the CNE is our yearly reminder that summer is on the wane. As a kid in the 60’s I started to count the “days of freedom” as the Ex began. It was a happy thought that one day during the run of the Ex I would actually be there- on the Exhibition Grounds. It was a sad thought that in a couple of weeks-or less, I would be on school grounds.
The Exhibition meant a lot to me. I loved being there on the shore of massive Lake Ontario. Sparkling blue water to the south. Toronto’s skyline to the north. When the city began to light up at dusk and the traffic flew along the Gardiner Expressway on a warm Exhibition evening, I remember thinking it just doesn’t get any better! I wondered what living in the city would be like. Of course I would find out in later years. I still love Toronto and I still love the CNE- if only for the memories.
What memories they are too. I saw Uncle Bobby at the CFTO “Glass” TV Studios that sat along Princess Way in the early 1960’s. That was a big deal to see “live” TV, and an even bigger deal was the year that Colour TV made its country-wide debut.
I owe it to the CNE for my Career in Broadcasting. Tagging along with my parents I let them do their thing while I would spend hours watching the antics of the announcers at the radio stations’ “ Live” remote broadcasts. All the big stations were there.
CKEY 590-The Good Guys in the CKEY Circus Wagon.  Toronto’s “Hit” Powerhouse 1050 CHUM. CHUM always had that prime spot right inside the Princess Gates. I watched from a distance being too shy to actually speak to the DJ’s. Remember John Spragge, and Duff Roman (he was on CKEY too!)? There was Jungle Jay Nelson and Brian Skinner. Oh- the Chummingbirds with Bob MacAdorey. They even performed on the stage at the back of CHUM’s CNE Studio. The Chum announcers broadcasting “live” daily from the other side of the glass.
As I watched I knew that this is what I wanted to do and be- a Broadcaster.
I never actually worked for a station that Broadcast from the CNE but I did work for a country radio station- CHOO, that Broadcast from a horse show called “QuarterRama” from the Exhibition Grounds. Close-but no prize.

A few years back I did a “fake” TV News bit at the CBC Newsworld Booth in the Better Living Centre. That was fun and I still have a copy of the tape they made for me. It wasn’t broadcast live to the country or anything but when I got home I fully expected my phone to ring. An agent calling, wanting me to replace Peter Mansbridge. It never happened.
The Canadian National Exhibition meant climbing the Shell Tower to look
out over the Exhibition Grounds and the lake. It meant drinking glass after glass of Honeydew Orange. It was my father taking us to the horse stall where he slept when the Ex housed the “boys” before they left for War. I cherish the memories of my Dad taking us to the exact stall where he slept waiting for the call to leave for Europe. It was quite moving.
It meant seeing the animated Fat Lady on the Mile-long Midway beckon you to ride and “Laugh in The Dark”.
The Ex was the “Wild Mouse”, a small “mouse-shaped car on a track that slithered several stories high and then took a sharp leap down again. What a ride. You had to hold tight your “felt” Exhibition Hat with the Purple Peacock Feather and your name etched in silver sparkle.
The Wooden Rocket was a thundering roller coaster ride through twists and turns.
Remember “the Derby Racers”? Those huge, colourful horses that stood this high and moved “like the wind” round and round in that huge space that housed them at the far end of the Midway. I can still feel the warm, candy-floss tainted wind in my face. Gee, you really had to hold on tight because those things really moved!
There was smell of the Tiny Tom Donuts cooking in the Food Building. Probably 50 cents a dozen back then. Free samples were everywhere. There were amazing new inventions and products to buy at the International Shoppers Market. That hot iron never slipped from the tilted ironing board-hard as the demonstrator tried. 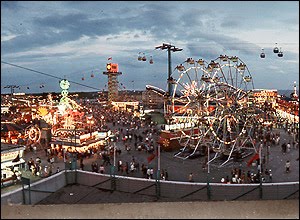 Nights under the stars at the Exhibition Stadium featured Bob Hope, Anne Murray and Frank Sinatra. Daytime thrills in that same stadium with the Hell Drivers. Relaxing at the Bandshell listening to a huge orchestra bathed in “cool blue” stage lights. I even bought a plant or two at the Horticulture Building directly in front of the Bandshell.
On Lake Ontario it was “Aquarama”. Oodles of finely-muscled young men holding other young men- ladies too, aloft as they maneuvered the choppy waters of Lake Ontario Red Maple Leaf Flags in hand. A stirring, patriotic sight!
I would watch the Water Show several times and still want more. Those were the days when men wore nothing but a Speedo and a pair of skis. None of this sissy-wet suit/lifejacket stuff today. Just bronze bodies glistening in the hot August sunshine. Can’t you just smell the water and the suntan lotion?
Today there’s a different odour coming from Lake Ontario.
The CNE used to host 3 million fairgoers a year in the decades of the 60’s and 70’s. Now about 1.5 million enter her Princess and Dufferin Gates.
The rest of them just don’t know what they’re missing do they?
Go to the EX before Labour Day because stepping inside the CNE Grounds is like discovering your very own “fountain of youth”!
Posted by Rob Reid at 2:26 PM