Finally some rain.
Hard, heavy rain.
Things are green again after we wasted tons of H2O on our gardens and lawns the past few days.
It had to be done because our "lillies" were gasping and the clemantis were drooping.
Thought I would drop a couple of lines this morning.
Hey, do you know I had 1500 people view my Rob Blog last Month.
That's a fairly respectable number- don't you think?
Speaking of numbers, Swisssh Rdaio listenership has broken a few records this past week and continues to do so today. The station has been listed on the Internet Rdaio Guide within the Windows Media Player for a couple of years now.
Anyway, a week ago I couldn't believe my eyes when I saw how listenership had gone up- suddenly.
I checked the Windows Player Guide on the Windows Media PLayer, where you'll see a tab for Internet Radio and there was Swisssh Rdaio- an "Editor's Pick".
We are keeping good company too- BBC World, A South Florida Classical Station and a Hard Rock station. Just 4 Editor's Picks!
Listeners from all over the world are tuning in...just not in Canada very much. At least not on the Windows 128k feed. I do see people from Winnipeg, Comox, Kitchener, Montreal, Hope, Edmonton, Richmond Hill, Toronto and others communities tuning in but not in the numbers from Italy, the U.S. and even Turkey!
It's amazing to say the least.
I have never had 100 concurrent listeners in the 4 and a half years for Swisssh Radio being on-air but I nudged that number a few times. Even at 6:30 this morning there were 80 some listeners.
The listeners change throughout the day as the world spins.
I would think hundreds have tuned in every 24 hour period.
Will it last?
Dunno.
My other server also has had a dramatic rise but I can't see where the listeners come from as far as city and country names.
So, it's been fun. One day, I'll type out all the names of cities that have listened to Swisssh Radio or visited the website www.swisssh.ca.
The site alone has had a couple of thousand more views over the past week than normal. Even this Blog has had more readers because of the link on Swisssh the Website.
It's all very exciting.
Oh yes, one more bit of excitement to cap this week.
I have a "major" Birthday on Friday.
~gulp~ 60!
How the hell did that happen?
It seems like I was just 45 a few months ago. I'll have some thoughs on that later in the week. I am having what I am calling a "Big Gay Celebration" at the Casino on Friday.
I think I scared a few people away with the invite.
They are imagining Drag Queens and semi-naked Go Go Boys Dancing on phallus-shaped pillars.
Not the case- unfortunately, however, I'd never say no to a fabulous Drag Queen or a well-toned Go Go Boy showing up at the party!
In the meantime, our show "Looking" runs it final week on the Gravenhurst Opera House Stage.
Info is below! The audiences have been great! Many from Orillia have already made the northbound trek and I know there are others who will this week.
The Norm Foster comedy "Looking" is now playing at the Gravenhurst Opera House. Fellow cast members Patti Scott (Nina), Phyllis Johnson (Val) and Jim Dwyer (Andy) and Me- as Matt, are having a hell of a good time presenting this show for you once again.
This time, the production company is Group Theatre Productions in association with the Gravenhurst Opera House. Come in from the heat and enjoy a couple of hours of laughter.
It's the best medicine!
Beats the heat too!
We've been involved in this show since last October, performing it at the Studio Theatre at the Orillia Opera House for MAT back in February. Now Group Theatre is giving us a chance to have fun all over again.
The cast and crew is still laughing at the situations and dialogue. 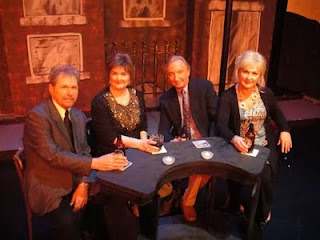 If you missed it in February, come see it for the first time.
If you saw it then, come and see it again- and bring your friends. Dine before the show at a Gravenhurst Restaurant.
Rombos- just like Orillia, is there opposite the theatre with an outdoor patio. You'll find familiar fast food stops like McDonalds, Tim Horton's and Boston Pizza are all in Gravenhurst. The latter at the Wharf.
The set- by Jim Dwyer is all new.
So is the lighting design.
There are even some "refreshing" twists to the look of this re-staged show.
Tom Ruechel is Stage Manager, with Lisa McKinzey as Assistant Stage Manager. Shimera Dione handles our Hair and Makeup.
You'll hear "Emily Darling's" sound bites. Emily is her real name but Darling isn't.
We just added her "new" last name, since we always refer to her as "Emily Darling" anyway.
Jason helps out backstage.
Details are at www.gravenhurstoperahouse.com
or phone the Box Office 705.687.5550
W still run July 26, 27 and 28.
Once you're on Number 11 outside of Orillia, it's a 20 minute drive. Mid-week too , so the traffic isn't quite so busy.

See you at the theatre! 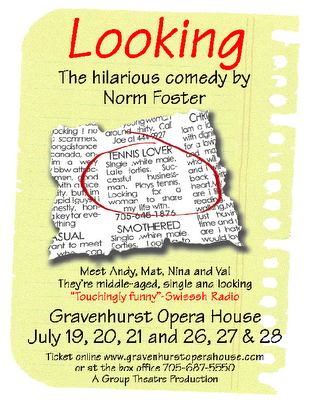