Readers- like you, have sent in a few more Questions for God. So I sent the Big Guy an “Angel-Gram” and he dropped by last week.


No listen, I can hear all you Catholics out there saying- If God doesn’t come down and make his physical presence known to the Pope- God’s representative on Earth, why would he sit down and speak to a “plebe” like you?

I don’t know why but I ask a rhetorical question-

"Why does God speak to Billy Graham, The Prayer Place’s “millionaire preachers” and US Preachers who continue to have sexual relations with prostitutes or other men. Not that there’s anything wrong with that but I ask you…"

Here are your questions and replies. Think of me as the Post Office at Christmas and all those letters they answer to H0H 0H0!

Thanks for this Big Guy. Let’s get right to the questions. Are you ready?

Was Mary a Virgin? Is the Pope Catholic? Does a Bear…

I think we get it Heavenly Father. Someone from Brechin e-mails…
Dear God, How come the Catholics have a Pope that they consider to be your representative on Earth. What makes them so special?


Now, the Catholics have always had their own peculiar little ways about things- all that smoke and those bells ringing! I’ve been in some of their palaces…I mean churches, where they actually have bones and things in glass cases they consider to be “Holy relics”. Jesus! That stuff even creeps me out.
What’s the buzz with that fellah Lazarus and your son?

Rob, I knew someone would ask me about that- eventually. My pat answer is “boys will be boys”. Laz was a young and handsome dude and my offspring had some stuff going on and with that olive skin of his and his black hair well…You see it’s like when a couple of guys snap their towels at each other’s naked butts after they shower in a public place. So what if the guys spent 30 days together locked away and didn’t want to be disturbed. What am I supposed to read into that. Okay...there’s that sexual stuff but he tells me he was just comforting Lazarus. Wouldn’t you do the same if you had a friend who had been rotting away and he suddenly jumped back to life and look fabulous? 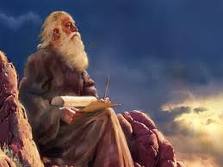 Right. I guess… Next question. Why do some people attend Bible Class each week and what do they get out of it?
They attend because nothing worthwhile is showing at the Galaxy Cinemas. Hah. Hah. I love that one. Pulling your leg there Christians. Look whatever turns your Christian Crank but seeing as the Bible- my book, was re-written back in the day of King James I think you’ll find that mortal man threw a few things out of the original script and re-worked other bits.
Now, it’s just human nature isn’t it? I’m not going to say “stop analyzing the Bible” but really people- "Stop analyzing the Bible!"

Next from Martha in Udney...

Udney. That always makes me chuckle...

Ahem~
Hi God. Did you actually tell earthly beings what to write in the Good Book?

Oh Heavens no! I’ve never been about forcing you people to do anything. Look- Live. Love. Be happy. Be nice to people. Don’t do anything to hurt your fellow man. Don’t kill someone or mess with someone’s husband or wife. Enjoy life.
Simple- isn’t it?
I don’t know why you let a bunch of guys who sat around a table back in 200 A.D. tell you who and what to believe. Believe what you will but just be nice. Try smiling. Buy yourself a new chariot- I mean car. Take a trip. See the pyramids. Try doing something on your own for a change. You don’t have to run everything past me and beg for more.
Grow a pair people!

God, why did you make Opera?

Why did I make Opera and classical music? Holy smokes. Don’t hang that one on me. When the angels get together for a jam session on their Lutes and flutes and harps- I skip town! I head up to that 3rd level of Heaven. Maybe some of you have studied that in your Bible Classes.
It’s like Maui. I go there for some peace and quiet. So look, don’t blame me for that Opera Stuff or even Beethoven. He did that on his own. Too much time on his tiny hands.
They were you know.

Well God, thanks again for coming down and answering these questions. I know you have to get back home.
Yes I do. The “other half” is BBQing tonight. Invited a multitude over apparently and I promised to do the steaks.

One final request… from me God.
What is it Rob?

Keep an eye on Ken Kostick. He left us much too soon.