I was riding a city bus the other day- in my dreams.

It was a vintage thing with big wheels and rounded fenders. A dark, sage green colour with white trim on the wheel’s rims. I had hopped on at a regular stop but I have no recollection as to where I was going- or why. The driver was amicable and was whistling a bright little tune as I threw some coins in the fare receptacle. As the bus roared into gear, I took a seat a few rows from the front- on the right side.

There was an old man sitting in front of me on a bench seat that was turned sideways, allowing him to face towards the other side of the bus, behind the driver. He was wearing a pair of black trousers held up with a pair of brown suspenders, a reddish plaid shirt and an old army jacket. A row of medals was pinned proudly to the jacket just above the left breast pocket.

Along came another stop. The brakes squealed to a stop and a couple of ladies with shopping bags climbed up the pair of steps, deposited their coins and sat in a row opposite me.
The bus started up once again and rolled merrily along the busy city street. As it did, the elderly man wearing the army jacket, turned and spoke.

“I am going to tell you a story. A story of a day back in France during the war. World War Two for you young folks sitting there at the back.” 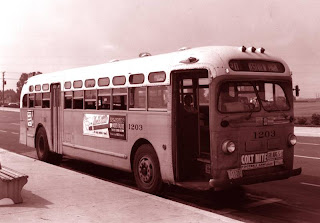 I turned. I hadn’t noticed the gaggle of teenagers sitting at the back of the bus. They must have been chatting to each other quietly, perhaps not saying a word in case the adults overheard what they had to say and “poo-pooed” their intelligence. It seemed strange not to see them on a cell phone or madly texting absent friends.
This was- I gathered, the 1950’s after all.
No cell phones.
No texting.
No tablets.
No Stephen Harper!

The ladies across the way clutched their shopping bags and purses, gave me a brief glance and turned their eyes to the old man. He continued-
“My fellow foot soldiers and I were making a trek through the French countryside just a few days after the armistice was announced. Just ahead we could see a tavern- or pub, sitting on the edge of a small village. It looked to us like a Chalet or pub one might see in any number of small villages dotting the German Countryside- just not in France! Strange. We were tired and thirsty, so we decided to go in and refresh ourselves. It had been a long war. We approached the door and entered. Suddenly the sound of a piano and a female voice singing an upbeat song could be heard.”

As the old man related his story, I could hear a piano begin to play. Looking at the bus driver, I saw that he had been suddenly transformed into a beer hall fraulein, dressed in a colourful skirt and frilly white blouse with puffy sleeves. What had been the steering wheel of a bus- just minutes before, had magically changed into a piano and the fraulein- the former bus driver, was masterly tapping the black and white keys while singing a jolly song all the while swaying to the right and to the left. She turned her neck to look back at us- the passengers, eventually urging us to sing along. We did at the top of our lungs! When the song was over the old man continued.

“We found a table not far from the piano and after the happy song ended Gerta- who introduced herself as she sat, joined our table.”
She slapped me on the back and said-

‘Vell Boyz…vats it going to be for a troupe of wary handsome Canadian soldiers, eh?’

"She was just delightful."- The old man smiled broadly as he remembered the time.
“She told us she had lived in the French Countryside for at least twenty years. Imagine. She had made it safely through the war and she told us she was glad that things were finally finished. We soon ordered up a bunch of beers and chatted, laughed and sang with Gerta into the late evening hours. We ate Bratwurst and French-fried potatoes. The brats were the best any of the boys had ever eaten!

‘Zo. You boys just passing through or vould you like a place to lay down your head for the night?’

‘No some beds with some clean sheets- and maybe a bath, would be good. Very good.’

“So we stayed the night. We didn’t have to be at out destination for at least two days and we deserved a little rest and relaxation. It was such a good time! None of us ever forgot Gerta and the little pub in the countryside.”

The old man stopped talking and gazed out the front window of the moving bus. The driver was back in uniform. He had removed the skirt and blouse.
The piano was a steering wheel again.
Shortly, the bus came to a stop. The old man stood up and walked to the door. He turned and waved a cheery goodbye to everyone on board, then disembarked.
The door closed with a Shhhhhhsst.

“Next stop Main Station!” cried the driver. The engine growled and once again we were on our way.