My Brother Scott turns 50 today!
Here are 50 things you need to know about him.

2. He has a temper- sometimes.

3. He stands up for the little guy.

6. He’s the youngest of three. My sister is the middle child. You can figure out where

7. His birthday is the same day Elvis died.

8. He used to ride a motorcycle.

9. He had a motorcycle accident.

10. He doesn’t ride a motorcycle anymore.

14. He can’t sing- at least I don’t remember hearing him try.

15. His entire face “lights up” when he laughs. 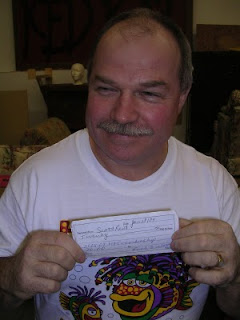 19. He was born the summer we moved from the shores of Lake Simcoe in to town.

20. He was 3 1/3 years old when his Grandfather Norman Reid died. He probably doesn’t remember his Grandad Reid. It was Christmas 1963 when Grandad passed on.

21. He was four and ½ when his Grandmother Lillian Reid (nee Watson) passed in January 1965. They both loved him. I remember all the attention he got. Another grandson in the Reid family to carry the name onwards. What was not to like?

23. He did know Lottie Bartley though. She passed when he was 25.

26. He loves model railroading and builds towns and cities around them.

28. He used to rollerskate when we all skated in Orillia and Barrie in the early 80’s.

29. Last time he skated- last year, he could still skate- but he sweat a lot.

30. He has a lovely partner Deb- who keeps him hopping or at least filling rubber balls with water. 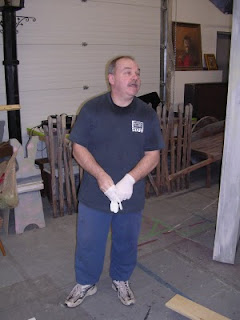 31. He has a canine companion “Rufus” who worships the ground he “barks” on.

32. He’s a salesman. He sells granite, mostly for the memory of those who have passed on. He’s good at it.

34. He enjoys travelling to Niagara Falls.

35. He has been on a cruise out of Miami to the Caribbean.

36. He went to the Bahamas- once. He would never go back- would you?

39. He tales her places and to appointments.

40. He puts a rose every now and then on Dad’s niche at St. James/St. Andrews.

42. He helped Mum buy a brick at the Legion in Dad’s Memory.

43. He’s tried to talk sense into Mum’s sister- Aunt Wilma, a few times. To no avail.

44. He got his sister Lynn a job where he is employed.

45. He once lived in a wonderful, old farmhouse in the country in Oro-Mendonte. We celebrated Christmas there one year. It was fun- yet emotional, remember Scott?

46. I was once having problems in a relationship when I lived in Toronto. I had no vehicle at the time. I needed my family. He drove down to the city to bring me back home along with my cherished Red Setter “Samantha”. I will always be grateful.

47. Scott tried living in the city for a few years when Tom and I lived in Mississauga. He was miserable. He moved back home. He is a homeboy at heart and there’s nothing wrong with that!

48. I don’t think he ever thought he would be 50! His Mother never thought she’d have three children over 50, let alone one!

49. He may not know it but he is still the baby of the family and his mother worries and keeps an eye on him to this very day.

50. He has a Brother and a Brother-in-Law who love him and wish him only the best each and every day of his life both today and all the days and weeks and years to come!
Posted by Rob Reid at 10:50 PM