We can be mad bastards at times- can’t we?
We can spew forth our views with little heed of the damage or hurt they can cause. Sometimes, views can be expressed in person, face-to-face with the target of our ill-will.
This has been one of the most popular ways of telling people what you think of them or their actions since the beginning of time. You know, when Adam stood naked with Steve in the Jardin d’ Eden.
Yes, they spoke French back then.
Very popular in the garden where everyone pranced about totally starkers.
Of course, in the beginning we’re just talking Adam and Steve but eventually there was much more nakedness about when one day, a nudist colony opened up in the enchanted Forest
From time to time Adam would tell Steve exactly what he thought of him- especially one day, when Steve pinched an apple from Adam’s prized Apple tree. After all Adam had won the blue ribbon three years running for his home-grown apples at the Jardin d’Eden Fall Fair and he didn’t need Steve messing with the product. Adam once told Steve-
“Messing with my bits is one thing but please Steve, keep your hands off my apples.”
Grow a Pair and have a pear instead.
Adam could get very angry at Steve when the occasion arose.
He told Steve in no uncertain terms and Steve took it like a man- many times, the mad bastard. 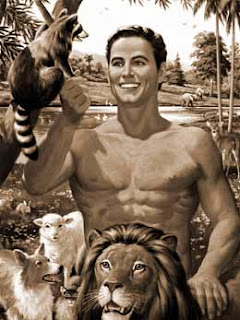 Today when one goes Online to read the news, many newspaper websites allow readers to add immediate comments, right after posted articles. This is a quick way to get all fired-up about something you’ve just read and immediately tell the author just what you think of their asinine point-of-view. Take that guy spotted walking down an Orillia street with a shotgun the other day. Scads of police surrounded the area where citizens had said he was seen.
A local newspaper reported the story.
In one of the first comments beneath the online article, the writer felt the entire police presence was an exercise in futility and made the point that the gun-toting fellah was perhaps just walking from house to vehicle with his shotgun.
See?
Mad bastards.
Sometimes, folks can have opposing views on local policies and procedures or perhaps the goings on at City Hall. That can sure get a gal or guy riled up. Why every day a local citizen asks- “What are you mad bastards thinking? What do we pay you for- to make stupid decisions?”
This same line of questioning can also be put forward when it comes to commenting on our politicians who take our views to Parliament Hill or Queen’s Park.
Well, not actually our views- their views under the guise of being our views. After all, they were the ones elected to power- not you or I- the damn fool on the street. They’ll say what they want and when they want as long as it ensures they’ll get re-elected…again.
Yes, having a view can be dangerous, especially if you want to share it. Your view can be especially dangerous if you share it with someone who doesn’t want to hear it. Maybe someone pulling in 60 or 70 thousand a year doesn’t feel that they have to listen to the “likes” of you. After all they have the job- not you.
They know what’s best because they are the paid expert- not you.
Yes, occasionally they will listen to a view- or views, to make it look like they are doing their
60 or 70 thousand dollar a year job but really, it’s just smoke and mirrors.
In the end you are really just hurting yourself when you express your own feelings. Your blood pressure goes up and those frown lines on your forehead deepen. You clench your buttcheeks and the red in your face glows like a light on a Christmas Tree. We are lucky today that we have so many people and so many ways in which to express how we feel and get all pissed off and out of sorts because we do so.
Poor old Steve in that Garden couldn’t express his views to any other person- other than Adam.
He just had to stand there in bare feet and naked ass with his balls drawn up tight while Adam went on about his prize apples.
Aren’t we just mad bastards at times?