Tom and I have lost someone very near and dear to us this day.
Our friend Sienny passed away this morning.
Cancer.
The cancer had been there inside her small- yet robust body, for a year and a half. She fought it...no, wait.
I think P ignored the evil within her. A disease that was destroying her 92 year old Dutch soul.
I am sure she would have had 100 years in her, if it wasn’t for that blasted, unrelenting cancer.
Fuck that Goddamned disease!
Mrs. P- as we called her, should have gone on forever. You always have this crazy idea that people like her will.
In the past year when we took her out to dinner, she asked us a couple of times why- after such a wonderful life, does there have to be so much pain. We told her we didn’t know but agreed it was unfair.
She was a best friend.
She loved chocolate. What’s not to like?
Sienny was the best friend that Tom and I ever had- even though when we moved from Mississauga to Orillia almost 21 years ago she referred to us as the “shitheads”.
She was upset that we were moving away from her life with us just down the street at                    21 The Chase.
Once day after the move, we called telephoned her daughter Jaki’s house near the shore of Lake Ontario. Her young granddaughter answered the phone. When I said who it was, she laid the phone down to ran to tell her Grandmother. I heard the young voice say-
“the phone is for you Omi. It’s the “shitheads”.
Apparently she had overheard P referring to us by that term and she used it. Quite freely.
Good Gosh did we laugh at that one!
I’ll never forget it.
Sienny was a confident. We could tell her anything- and we did.
She was mothering- although we never considered her that. However, on our wedding day she
was a surrogate Mother to both of us. There’s the sweetest picture of P looking up into Tom’s face while cradling it in her hands. Those perfect nails of hers.
The perfect makeup and the gold- everywhere. 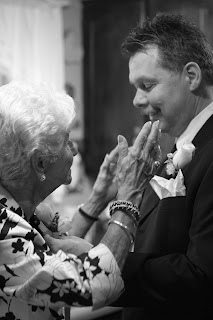 Mrs. P was
Sincere.
Loving.
Close to us.
She loved her Bloody Caesars and salty snacks.
She was fun.
Adventurous.
Smart.
Intelligent.
Modern.
Brash.
A clothes horse. She’d change a hundred times a day when she stayed with Tom and I at Pine Tree House. It was just who she was. Her appearance was important and it showed.
Sienny was lively day or night- unless she dozed off in the chair and then she snored contentedly.
She was Fearless- even in the face of Cancer.
She was so very loving. Her heart burst with love.
She kissed our cheek every time she saw us.
She talked of Holland, the war and her years in South Beach in Fort Myers and of course her husband Dick. She’s seeing him again now after so many years.
Our “Petunia”- another of our pet names for her- was all these things and more. 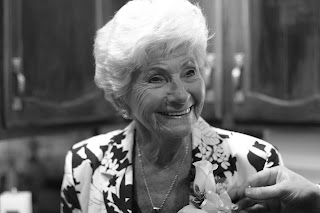 Like Tom and I, Sienny was not a believer in God and all that hocus pocus.
There’ll be no funeral.
We often talked about what lurks “afterwards” many times over the years.
A few times over the past year especially.
If there was even the slightest chance of an Imperial Deity- which there isn’t, would a God wouldn’t make his/her people suffer.
Of course not!
Where the hell does “love” come into that fucked up idea of a superior being that made both Heaven and Earth and demanded subservience?
She hated being unwell. It just didn’t fit her life.
Now, our Darling Sienny knows the truth.
I am sure she is asking all the right questions as she adjusts to the next plain of existence.
“Vhy” (think “why” with a Dutch accent) right up there at the top of her list.
She would also say “listen…” and you’d know she was about to ask a very important question and you had to answer it.
If you didn’t it was followed by another “Vhy?” 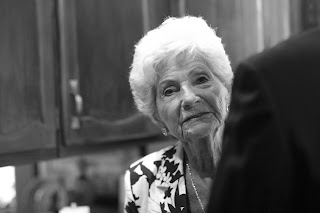 So Darling “P” you have moved on without us and we can’t wait to see you once again- and we will. You can be sure of that.
We can hear her voice now…