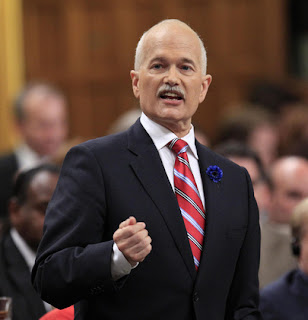 Like many other Canadians, this has been a difficult week for me.

I mourn the passing of Jack Layton.
Jack was my hope for the future of this land.
He was a man and the head of a party that would keep parliament in check.
Now, that hope has been dashed.
What wil the future hold?
Who knows...
I have decided not to write a blog for the rest of this week. Instead, my ROBBLOG will be this tribute to NDP Leader and Leader of the Opposition Jack Layton.
Jack passed at 4:45 a.m. Monday morning.
Cancer stole Jack away from his Family and his country.
My husband Tom and I met Jack.
It was two years ago at Toronto Pride. We seached him out. He was at the NDP booth busily chatting to those who passed by.
We introuced ourselves and told him we had been together for 25 years- at that time, and married 5 years before.
He hugged us heartly and called Olivia over. As it turned out, our anniversaries were just days apart.
We chatted. Laughed and smiled.
He acknowledged that more work had to be done in Simcoe North.
I will never forget that day.
I will never forget the sparkle in his eyes and the gladness he left in our hearts. Both he and Olivia treated us like family.
It was wonderful.
One regret.
We forgot to take pictures.
It's a sad time for this country indeed.
Mr. Layton's letter to Canadians says it all.
You'll find the final paragraph at the end of this blog.
Mr. Layton laid in State this week at the entrance to the House of Commons, in the Parliament Buildings in Ottawa- our Nation's Capital.
Now he's back in Toronto.
He lies in repose at Toronto City Hall.
His memorial service- a celebration of his life, will be at Roy Thompson Hall in Toronto on Saturday afternoon at 2PM
May Angels fly you- gently, to your rest!
Although knowing you Mr. Layton, you'll be keeping an eye on things.
On Saturday August 21 Jack wrote a letter to all Canadians. Here are the final words he wrote:
...consider that we can be a better, fairer, more equal country by working together.

Don’t let them tell you it can’t be done.

All my very best,
Jack Layton.
Posted by Rob Reid at 7:20 PM