Now for your Weekend reading pleasure, a bit of a scoop. I am writing this show. It takes place in a launderette- God I hate launderettes! I used to do my laundry in one back in the 70's- eeek! Anyways, the following is what is called a tease. Enjoy. And please...don't judge me.

Scene: In a laundromat in an apartment building. A couple of washing machines and dryers. A few chairs. A table with magazines. A folding table. Various signs on the walls and a picture or two. A doorway at stage right. Bobbi enters. He’s carrying a basket of dirty laundry. There’s a box of detergent on top of the laundry along with a bottle of fabric softener. He separates his colours and whites.

He starts reading the side of the laundry box.

Bobbi: (exasperated and breathy) Shit! Why do I always turn to the French side of the box first? “Mesurer la quantitee recomendee de detergent”….Where does it say about pre-soaking. (he reads the back panel) Hmmmm. Here it is. Soak soiled garments. They make it sound so dirty.Why don’t they just say dirty. Soak soiled garments for one half hour in cold water. Do not rub. Oh, pardon me. It is dirty…Dah. Dah. Dah…Daaah. (he continues to sort clothes etc.)


Wayne: (enters through Laundry room door carrying a laundry basket) Hey Girlfriend. How they hanging-Bobbi? Talking to yourself again for company? Poor Dear?
Bobbi: No and yes, I'm just fine Wayne and I really wish you wouldn’t say that.

Bobbi: “How they hanging?”. It’s so red necky. I just hate it. It something right out of a “straight boy's” locker room.

Wayne: (he laughs) Me a Redneck? Honey, have pigs started flying?

Bobbi: Few and far between- if you're referring to any dates I've had recently.

Wayne: I thought you were tight with that “waiter” guy. What is that company called he worksfor? Oh yes. “Boys with Balls”. Chicken or Beach? (he laughs)

Bobbi: Oh, he was always working nights and well quite frankly I wasn’t up for “it” at 2:30 in the morning-every morning.


Roger comes in in a pair of blue jean shorts- cut high, and a white tank top.
Roger: Did I hear someone say “up for it”? (Roger has some laundry in a sack)

Bobbi: Oh look what the fleet dragged in.

Roger: Bobbi, Darling. I haven’t been out with any boy in the “fleet” in absolute months!

Wayne: Why? Did the Port dry up?

Roger: No I’ve raised my expectations, some.

Bobbi: Keyword “some” What he really means is he’s abandoned a “sinking” ship of heartbreak and betrayal. (Bobbi's hand is resting on his forehead as if weeping)

Wayne: How Titanic of you Dear! 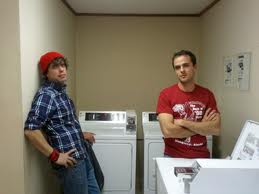 Roger: So are you two Fags here for laundry or a gossip-fest?

Wayne: Why? What have you heard Dear?

Roger: Never mind! (He puts his hand in the air) So is everyone present for Laundry Day at the Launderette. My Conchitta Girl has the day off. Again!

Wayne: You only wish you had a Conchitta you lazy thing!

Roger: I do have a Conchitta- in my mind at least.

Wayne: Only when you play dressup! Frankly, I’m surprised there’s room for anything in your
mind.

Bobbi: Not here Girls. What if Mr. Levenstein were to hear you talking that way…

(a voice comes from the hallway. Mr. Levenstein enters with a mop)

Mr. Levenstein: So, what. I am out here in the hall scrubbing the floors and I can’t hear you. I hear every word you Keens say.

Bobbi: Queens, Mr.Levenstein! The derogatory word is “Queens”. Not Keens. You hear every word the Queens say!

Mr. Levinstein: Of course I hear every word because I listen. That’s why. I love the Queens. I love all Queens. Her husband, not so much and that horsewoman daughter-don’t get me started.

Bobbi: I wouldn’t think of it.

Roger: Mr. Levenstein, I hate to mention this again..

Roger: Mr. Levinstein, as superintendant of “Light in the Loafer Towers” I must protest to you once more. Mr. Popadopolus in 311 is playing his music way too loud again. It wouldn’t be bad if it was in the afternoon but at 1:30.

Roger: No, I mean the other afternoon. The afternoon that comes in the early morning!

Mr. Levenstein: If it’s not you complaining-it’s her. (He gestures to Wayne)

Bobbi: Her who- Mr. Levenstein?

Wayne: I hear she is sweet on you!

Mr. Levenstein: Sweet? Pooey. Phooey. She wouldn’t know sweet if it was wrapped in chocolate. I don't know what you “rags” hear...

Mr. Levenstein: And on that note. I shall take my departs young Gentleman.

Roger: Ohhh. Gentlemen. Get her!

Wayne: Shhhh. Roger. (Turns to Mr. Levenstein) Nice talking to you Mr. Levenstein. Have a nice day! Look Girls I gotta go too. I got a cake in the oven.

Roger: That's not the way I heard it.


They both exit.
Bobbi: See ya later fellas. (Bobbi goes back to his laundry) Now where's that damn bleach?
Posted by Rob Reid at 9:33 PM