We were off to Pride yesterday, my husband and I.
Oh, we took a bit of a side trip first. You see, we drove up to Huntsville and assured Rob Ford that there was plenty of room in the Swissshmobile for a safe and comfortable ride to Toronto's Pride Parade.
“C'mon, Robbie-Bobbie. Come with us to Pride!”-we cried. “We'll protect you. It'll be fun. Just look what we brought you to wear Sweetie!”
We held up a lavender ballet costume. It's bottom-most edge trimmed with stiff, white, frilly tu-tu material. We held the costume aloft for Mr. Mayor to see. He practically fell back, right into a plot of poison ivy. Eventually he caught his breath and slurped a huge glass of beer from a plastic tumbler his mother had ran and fetched for him from the beer fridge out by the dock.
“I appreciate the offer...ummm....boys for a lift to the Parade.”- says the Mayor,” but I should really stick around the cottage and uh...uhh...pick the Muskoka dirt out from under my toenails!”
“Oh. Yes. We completely understand your Honour. We'll let everyone know!”
So, we left Mayor Ford a pickin' and a grinnin'- and a little drunk too. Wishing him well, we flew off down the highway towards Pride. 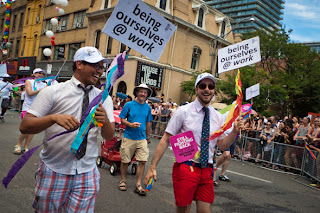 It was a fabulous party! Over a million revellers!
Former Mayors David Miller and Barbara Hall were there marching in the 37 degree heat.
Brian Burke of the Maple Leafs travelled 25 hours to get to the Pride Parade. He had been visiting our troops in Afghanistan on Canada Day but he made it to the parade- with only hours to spare, just to march in honour of the memory of his Gay son. It was the second year in a row he had done so.
Rick Mercer walked along next to him.
15 Toronto City Councillors were there.
Bob Rae, Jack Layton and that leader of the Greens- Liz May, all marched but n'er a Conservative in the whole bunch!
Wait. Late breaking news!
There were- I am told, four councillors who have their heads up Rob Ford's righteous ass marching.
Good for them.


Some participants were dressed.
Some were partially dressed.
Some were completely naked- who should have been fully dressed.
I hate to point anyone out in particular but in the spirit of Love and Pride, this one particular “Chick with a Dick” was especially naughty. She even held up foot traffic because all the straight boys wanted to take her/his picture.
I know.
We didn't understand that either.
In fact, it is a fact that all the straight men come to Pride just to take pictures of all the Dykes who parade around Church Street with their boobies flopping this way and that way. The straight women attend with their husbands/boyfriends to look at all the semi-naked men with the gorgeous bodies that they really wish their husbands/boyfriends had.
The straight gals also get the “giggles” posing with the “muscular” Trojan Condoms boys. Usually there are so many straight gals waiting to have the “Trojans” throw a muscular bicep around their shoulders that we poor Gays Boys give up our chance for a photo op because the line-up is just too long.
Same thing over at the TD Bank display. Muscular “pretty” boys in tight green Speedo swim suits- probably “gay for pay”, are throwing long, beefy arms around the straight women folk.
You do understand “Gay for Pay”- right?
If you don't, that's when totally straight (grin, grin) boys sell their looks and bodies for money. No sex.
~ahem~
I said there's NO Sex! 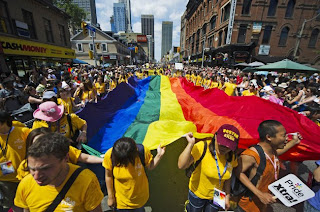 God it was hot.
Very hot but a nice breeze ponced down Yonge Street from time to time as the parade took over four hours to complete the route from start to finish.
We had a great time. You really had to be there to experience what a day Pride is and what it really means. It's not all “titties and dickies” swaying in the hot sun as some media would have you believe. We ran into some boys we knew and met and talked to some boys we didn't know.
We had dinner, a few drinks and wandered around.
Eventually- as dusk started to fall, we made our way to the subway and the trip home.
During the drive I said to Tom-
“You know our family and our 'straight friends' really don't know us- do they? I mean, they think they do but they only see us within the context of a “heterosexual world”.
It's true.
It's too bad too.
They should experience what it feels like to be in the minority.
Just once.
You know, when a bunch of Gay people are sitting around talking, it's really a different world. Throw one “straight” person into the mix and the whole dynamic changes.
It does.
It's hard to explain but believe me- it changes.
So, maybe a trip to Pride and seeing all there is to see might be an eye-opening experience. The best thing that would happen would be the opportunity to really get to know who my husband and I are- as a couple.
A Gay couple.
Oh, there's  lots of fun too!
Have any of our straight friends ever seen Tom and I hold each others hand?
Nope.
Have they ever seen us throw our arms around each other in love and happiness.
Nope.
Okay. Once. At our wedding 5 years ago.
Have they ever....
Nope and nope again.
They may think they know us- but they really don't.
However, there's always another year- isn't there...
Happy Pride.
Posted by Rob Reid at 9:28 PM