One of my favourite movies of all time-without question, is Billy Wilder's “Some Like it Hot”. This 1959 Comedy starring Tony Curtis, Jack Lemmon and Marilyn Monroe is in widescreen format and glorious, crisp and clear black and white. I slipped it into the DVD player recently to watch it for the “millionth” time.

Once, I saw Some Like It Hot on the “big” screen at a movie house on Yonge Street, near Lawrence Avenue in Toronto. This theatre ran “older” films on the big screen.
While watching Marilyn's performance as “Sugar”, I am aware of the scenes in the film where she “ballooned” in weight because of “pills and such” and still other parts where she had difficulty remembering dialogue. For instance, she was “heavier” in the yacht seduction scene with Tony Curtis. She had been off-set and Wilder began to film around her. When she returned to the set she was 20 or 30 pounds heavier. Watching her flop on top of Curtis in that “dreadful”, almost see-through Orry-Kelly gown is painful.

That is also the scene where Curtis is rumoured to have described Monroe as very “distant”, unaware and an "emotionless kisser". I have also seen Tony dispute this fact. Then, that scene in the hotel room where Miss Monroe is reading dialogue from a blackboard. It's the scene where Curtis' character is saying goodbye on the telephone. Once you know this, it is really quite easy to realize she's reading her lines. Just watch her eyes. She's straining to read from the board. Wilder just became impatient with take after take, so it was suggested the dialogue be placed on the blackboard for the actress to read. 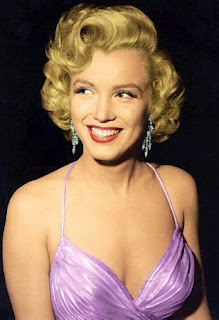 After watching the movie, I started to think about Monroe's death again. As a matter of fact I find myself looking into her eyes whenever she had a close-up. I wonder what went wrong. I wonder what really happened that August evening in 1962. I wonder what Marilyn would have been like at 80+ years of age- if she had survived.

I did a search and began reading articles about her life-and her death. One thing became clear as I read various articles- what happened to Marilyn is not clear. One of the most fascinating sites I came across was the FBI information site. There had been a freedom of information act passed in the U.S. like here in Canada. From April 2006, I found page after page of FBI correspondence and information that had been gathered about Marilyn's activities. Most of the documents were scanned from originals with notes in the margins and important names blacked out- for the most part. Some of the activities included in the more than 50 pages were her involvement with friends and associates who had Communist leanings. It was alleged she socialized with mafiosi members after being introduced by Frank Sinatra. Peter Lawford was one of the last people who spoke with her on the phone from the bed where she died. John F. Kennedy and his brother Bobby were frequently referred to, with the hint of a romantic tryst with Bobby. From "The Day Marilyn Died"-

Marilyn had calls that morning, and by the time I saw her she was in a rage, Newcomb said. Some believe the phone calls were from Peter Lawford and Bobby Kennedy- in that order. Several other disturbing calls had come intermittently during the night, in which a female voice screamed, "Leave Bobby alone!" According to some speculators, Robert Kennedy arrived at Monroe's home the afternoon of the fourth. Hollywood detective Fred Otash claims that-"Marilyn and Bobby had a violent argument and she told him that she
felt used and passed around. At the end of the argument Marilyn ordered Bobby out of her house.

In fact on the evening/morning of her death it was reported that Robert Kennedy had called her to end their romantic association and told her that he would not leave his wife nor would he see her again. This was thought to be the reason she took the overdose and that fact has been reported on time and time again in various books and magazine articles. Other facts hinted at the possibility that Monroe's body had been taken to a hospital for whatever reason and returned to her bedroom before police were called. It was said that phone company records had been erased to negate any follow up with high profile callers- such as Kennedy and others. Her companion/housekeeper- Eunice Murray, had reportedly cleaned Marilyn's room before police arrived. Pat Newcomb was appointed her personal publicist-possibly by the Kennedys.
﻿
﻿ All interesting twists and turns in a sometimes sad, sometimes happy but unfortunate life. She was brilliant at comedic roles. Witness movies such as “Gentlemen Prefer Blondes” and “How to Marry A Millionaire”-where she walks smack-dab into a wall in the ladies room because she refuses to let men see her wearing glasses. A very funny, totally Marilyn “bit”. There's “The Seven Year Itch” another Billy Wilder Comedy that co-starred Tom Ewell and even the un-finished “Something's Got to Give” where Marilyn looks radiant on the screen. She was waiting to go back to work on that film when she died. There were memorable dramas such as “Bus Stop”, “Niagara” and “The Misfits”- in which she starred alongside Clark Gable and Montgomery Clift.
Files from the FBI Website state:

In April 2006 newly released FBI Files referred to a dinner party at actor Peter Lawford's beach home. Among those in attendance were Marilyn Monroe and John F. Kennedy. Monroe had been married to playwright Arthur Miller, who had many communist friends in and out of the Hollywood and political circle. Monroe also had known associations with suspected mafiosi through her relationships with Joe DiMaggio and Frank Sinatra.

Marilyn's death will remain one of the mysteries of Hollywood. Oh, you can believe the literal translation of the events surrounding her death but I think there's much more. The inevitable fact is that as years go by there are fewer witnesses, Hollywood types and Government insiders who know the real story but choose to keep it hidden. Too bad. It would be closure for all of Marilyn's devoted fans and of course Marilyn herself, if the absolute truth were revealed.