I saw Ricky Martin the other night at Casino Rama.

Yes.
He was hot.
He has the whitest teeth.
Nice arms muscles even though he scarred his upper arms with stupid tattoos. He probably doesn’t think they are stupid. They probably all mean something deep and Puerto Rican.
He had a nice trim, athletic body. Muscular chest and a nice, tanned sexy waist with a half dozen abs. Are there that many? A half dozen on the average man?
Maybe I should say he had up to a half dozen.

Sitting about 7 rows from the front of the stage with my naked eyes and his semi-naked body- he looked good! I was there to enjoy the show- which included a Puerto Rican travelogue of sorts. Ricky personally- his words, invited the entire audience to Puerto Rico. It's Pay Aas You Go though!
‘course if Puerto Rico is so great why do Puerto Ricans leave for the mainland.

I’ve always considered Ricky a little too blonde.
You know…
No, I’m not talking about his hair colour.

I always looked at Ricky as being Gay. My Gaydar helped. That and the fact that he always denied his sexuality, saying that it was OK with him if both men and women lusted for his Latin Loveliness.

At Casino Rama however, he was not too Gay. Wouldn’t want to turn away the female audience, so he chick-a-boomed the whole night through! Screaming, blonde “bimbets”- who couldn’t possibly have heard Ricky Martin sing a single note, screamed like a pen full of little pink piggies in a yard at a rural Ontario slaughter house! Those that weren’t “squealing” were busy texting their little tails off. What were they saying to their friends back home whom couldn’t go to the concert?
Things like:

“Like I M at Ricky Martin concert and OMG is he ever cute!”


“I could make love to him all night long and in the morning we would stroll the beach and he’d kick sand in any bully’s eye- if I asked him too!”


“ I want to ask him if he’ll date my brotehr Bruce and marry him and then- like, I could be his sister-in-law and I could look at him across the table at dinner and we’d go swimming and stuff…”
“Guess where I am right now? At the Ricky Martin Concert. He doesn’t look that old in person for an old guy!”


“OMG I want to twirl on his manhood and make all my Gay friends sooo jealous. I mean it Marsha. I do. Like that would be sooo cool- right?”

Martin is definitely a stunner. Huge Puerto Rican smile. Long, lithe fingers that if given the opportunity could be in many places on one’s body all at once. His big bronzed, chest and tight stomach muscles- with a generous sprinkling of “man fur”, glistened in the hundreds of stage lights. It was a delight for all the Gay men in the audience to be sure. I just couldn’t understand why were those girls screaming and dampening their “Wednesday” Panties? Possibly, they hadn’t read that Ricky came out of the closet. 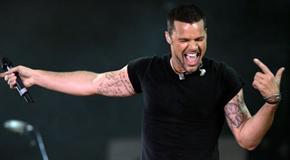 I suppose it would be comparable to me admiring that dark-haired cutie Allan Hawco from TV’s Republic of Doyle or gorgeous movie star Jude Law, when I know they’re both probably straight.
I must admit I feel a lot closer to Ricky knowing that he’s now part of the same family. You now that he attends the same church.
Is a friend of Dorothy??....

The concert tour is entitled the Musica+Alma+Sexo Tour. I think “alma” means “deafening”. Ricky’s Latin Beat throbbed for 90 full minutes. I mean, I wouldn't mind him throbbing me. Just not in my ears- if you get my drift! After his first two numbers where he hung from the scaffolding as he sang, I wondered- “Okay Ricky, so you have some scaffolding. What else can you do?” Now, Ricky is no Lisa Minnelli- although he wore several of her costumes.
He makes more costume changes than Miss Ross!

On stage he never takes his shirt off completely- but he gets very close. His flesh and picturesque Puerto Rica “man boobs” are thrust out in many of the high energy numbers. In one Latin number, a trio of sultry gals took whips to Ricky in a rather provocative way. , This ain’t no show for your Granny, the weak of heart, Baptists or Steve Harper followers. Mr. Martin eventually gets the upper hand and control of the whips and leashes the gals like pitbulls, as they fan out on their leashes in front of him on their hands and "paws".

He lords over them like Mighty Thor. Personally, I thought it was a little degrading to women but maybe it’s a Puerto Rican thing. On the other hand I had no problem seeing Ricky’s buck-naked image projected on a huge white sheet that hung down from the lights high above the Casino Rama Stage. Nothing really showed that mattered.

His music? After Living La Vida Loca, She Bangs (again a very provocative “Hetro” kind of number) and a couple of other familiar songs, every song sounded like the preceding song. Even the half dozen Gay men who sat along the row next to Tom and I we were expecting a little more “Gayness” from Martin. Nothing crass and naughty, just some wholesome "Fagness" certifying that Martin is one “hot”, proud Gay man.

Listen to me girlfriend. Here’s a “Gay Truth”. A Gay Man can only take so much of a sexy woman crawling up and down a Gay Man’s body- such as the one Mr. Martin had eventually rolling off his lap.
At one point, we Gay Boys wanted to reach for the “Fag Gag-Bag”.
I believe it would have only been fair if a handsome stud came on stage- clad in only a Speedo swimsuit, to give Martin some heavy-duty lip suction and hot body action that would turn us all on our homosexual asses.
It never happened. The “real” Ricky Martin the person however, was in short supply. The entertainer was there in all his tanned, bicep-clad glory, sporting a newly “shaved-look” haircut.
Whad-up wit dat?

Perhaps that is why we went to the concert. It’s just that the real party was on stage with Mr. Martin, his dancers and band.
We weren’t invited.
He wasn’t about to share that party even though his “tighty-whitey” tee shirt proclaimed You=Me- as in equality.

Too bad Mr. Ricky’s personality didn’t make it past his gleaming, white teeth.
Posted by Rob Reid at 9:59 PM