The Final Flourish in New York

This final blog about New York takes us to Rockefeller Centre, NBC and a Broadway Opening Night!

It was a rainy, miserable, mid-week day that Tom and I decided to go to Rockefeller Centre. We followed our map and made our way to Radio City Music Hall. Blue banners on lampposts proclaimed we were in Rockefeller Centre but we were expecting to see the iconic skating rink, flags and gold figure that populates so many movies shot in New Tork- like Home Alone, not to mention Television shows such as Saturday Night Live.
﻿﻿﻿
﻿﻿﻿﻿
﻿ We looked around to get our bearings. To our left, there was an open square with a huge rectangular fountain in it’s centre. There in front of the fountain, were three gigantic flag poles. Looking up we saw-on the middle pole, a huge Maple Leaf Flag snapping briskly in the wind. It was flanked by an American Flag and the Japan Flag. It was a stirring sight- yet we couldn’t figure out why the flags were there- especially the Canadian Flag. We took a picture before deciding to ask directions from someone on the street.
We approached a young man in a business suit, carrying an umbrella which he had hooked over his arm. He was about to cross the street- The Avenue of the Americas.
“Excuse us but are we near Rockefeller Centre?”- we asked

He smiled and said-“I’m not sure.I don’t work in this area. Let me google it.”

He pulled out his Blackberry and said- “Here, I’ll walk with you.”

He assured us he had the time and walked along the sidewalk right next to us. Suddenly he stopped. “This is where the map says it is. We should be here already.”
He seemed puzzled but then we were as well.
I broke the silence standing there on that wet, Manhattan sidewalk.

“Look, I can see the branches of a tree down the street on the right, just past that building.”
I pointed up the street. 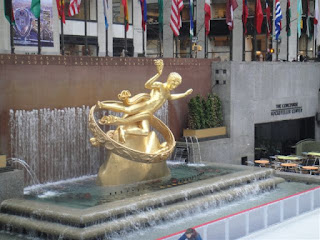 We both thanked him for his time and walked in the direction of the tree. This was what we were looking for- finally. Suddenly the street opened up and there to out left was a skyscraper with the words- “Rockefeller Centre” right over the entrance. Across the way, hundreds of flags flapped in the damp, misty air- even another Canadian Maple Leaf. We walked to the edge of the first row of flags, looking over and down. There was the skating rink with the huge gold figure- that appeared to be in flight, at one end. It was keeping a watchful eye on the skaters on the rink.

Opposite was the Mall that opened up Rockefeller Plaza to 5th Avenue. To our right, the studios for NBC and the area where their early morning show- The Today Show, was broadcast. We went inside and saw that the SNL studio was a part of that day’s tour. Across the lobby there was a line forming for that evening’s Jimmy Fallon Late Night Show. The audience members were just beginning to clear a security checkpoint.

Unfortunately, by this time the afternoon was getting late. It was 5ish and we had to return to our hotel- The New Yorker at 8th Avenue and 34th Street. It was a long walk and we had been walking for hours already. We headed along 5th Avenue past Saks and back towards Broadway and over to 8th Avenue.
We needed a good rest before dinner an a show.

This time on our New York visit, we had decided to buy tickets for Broadway Shows at the individual box office at each theatre. Last time- about five years ago, we had ordered theatre tickets online. Yes, the TKTS booth was right there in Times Square- but who wants to line up- in the rain, for a few hours in the hopes of obtaining cheap tickets? For all the shows we saw this time, we got great deals and good seats. Only for La Cage Aux Folles did pay full price, however we sat front row centre. That was worth it!
﻿﻿
On our final evening in New York, we had tickets for opening night of the Broadway Show- The Book of Mormon- God’s Favourite Musical. This show was written- in part, by Trey Parker and Matt Stone- the writers and producers of South Park. We were excited! As is the norm in New York, Broadway Opening Nights usually start at 6:30. The Book of Moron was no exception. We decided to wait for dinner until after show. We would eat at an Olive Garden that we had seen earlier, located on the second floor of a building that looked out onto Times Square.

We left the Hotel about 5:30. The doors to the Eugene O’Neil Theatre would open at 6 o’clock. When arrived, the media were in place in white tents pitched along the sidewalk, just outside the theatre. The doorman ushered us into the lobby area and we stood with about a dozen others. All of a sudden, through the glass doors, we saw Bill Hader standing a few feet from us. Bill’s one of my favourite Saturday Night Live stars. Just a few moments later, Jack McBrayer- Jack the NBC Page on 30 Rock, stood outside the theatre. It always seem a bit unreal when you see Television or movie people in the “flesh”. We tried to act like New Yorkers- not tourists! We knew we would be in the company of “stars” on opening night! The doors opened promptly at 5:30 and we were ushered to our seats in the balcony.

“Cripes we’ll never see anyone from up here!”- I said to Tom.

Then, a few minutes later, in walks Tyne Daly (Judging Amy, Cagney and Lacey) and sits down about 10 rows from us. She looked fabulous!
The theatre soon filled to capacity and the show started.

It was absolutely terrific. It was so well done. We laughed till we cried. The songs were terrific. The actors on stage couldn’t have been better. It was a fantastic night and one we’ll remember for some time to come. This show will tour eventually and I am sure you’ll have a chance to see if in Toronto.
It’s a must.
I’ll e-mail Mr. Mirvish and suggest he see it and bring it to Toronto.
﻿﻿
﻿﻿
We topped off our final New York night with a wonderful dinner with great service- thanks Nick, at the Olive Garden. The view out the window next to out table was mesmerizing. The people, the lights, the excitement.
This was New York.
We’ll be back- soon. We even lost a few pounds and tightened up the calf muscles- since we walked most everywhere!

We flew home to Pearson International the next day and made the one hour trek north- stopping at a Tim Horton’s along the way.

NOTA BENE: All Blog photos of New York by Tom Ruechel (Excepting the Book of Mormon Photo)
Posted by Rob Reid at 9:47 PM