My Mum passed on this past Wednesday April 30th at 230 PM in the afternoon.
She was living at Spencer House in West Orillia on West Ridge Boulevard.
Not really living but existing.
Nice people there at Spencer House’s Spruce Lane.
Terrific people that cared for Mum in a way my brother and sister and I just couldn’t.
While there these past 3 months, we visited Mum every day- sometimes twice a day or more.
Nice people, as I said.
Nice place, as I said but really just a warehouse for seniors waiting to enter the next plane of life.
I have updated the rest of this blog below from one I wrote a few years ago.
Here’s to you Mum!
See this picture of my Mum.
There she sits on a piece of concrete. It’s obviously summertime.
Slip-ons and bobby socks.
Her hair in tight curls. Usually in pictures of this era she had a bandana wrapped around her hair and tied at the back. I don’t think she’s wearing one in this picture though.
I’m sure she had to wear some type of head covering while working the grill.
Mum also made bombs at Piat in Orillia.
Funny, if you knew my Mum.
Couldn’t put a DVD disc in a DVD player but in the 40’s she made bombs!
I have pictures of her wearing her bomb-making overalls too.
Mum- Marion Reid (nee Bartley) was also a “Supertest Girl”.
What’s a ‘Supertest Girl”?
No, it’s not a burlesque Revue. Mum worked at the Supertest Grill at Front Street South and Colborne Street. The building is still there but it’s empty now after a Rent-to-Own furniture store moved to another location.
Mum came from Peterborough.
She was one of four daughters born to Bruce and Lottie Bartley.
A sister- Wilma, still lives in that Kawartha City. I loved it when the “Sisters” got together. Memories and stories of years gone by sometimes came off sounding a bit different. Two versions if you will. For instance, Aunt Wilma says she stole my Mum’s new bike. Mum says Dad stole it, only he didn’t really steal it, he just “borrowed” it to get to the Lacrosse Arena where he was playing for the Peterborough Team. Maybe even I don’t tell the story exactly as it happened.
Not that it matters. It’s funny either way. 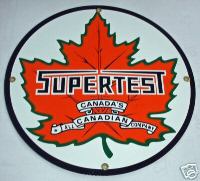 That Supertest Gas Station and Supertest Grill was still in operation when I was a child of the 50’s. This picture of Mum was taken when my Dad was away overseas during World War II. You can’t see it but there’s some mushy writing both along the bottom edge and on the back of the little snapshot. I just didn’t feel that needed to be shared with my “global” audience. You know, “missing you” stuff.
I guess Mum liked working at the Grill but she and the other gals hated working the weekend nights- especially after midnight.
Orillia was dry you see. No booze.
Liquor and beer was scarce as hen’s teeth. No Bars. No drinks in restaurants.
Ahhh… but there were bootleggers.
People who illegally sold booze to the infidels.
Orillia was dry when I was a kid too.
Temperance Ladies and the ever-powerful churches- especially the Baptists, kept a short reign on those who liked a bit of wine with a meal.
The Devil’s elixher to be sure!
So, Mum and the other Supertest Gals hated the weekend nights because the drunks would arrive for burgers after the hotels in Atherley- that little den of purgatory, closed. There was the Atherley Arms- the First. In recent years, you might have known it by the name – Girls! Girls! Girls!
Strippers.
Underage drinking and a murder in the parking lot.
Today it sits empty and for sale.
The other bar was the “second”. I think it was the Champlain or something like that. I never went in as a teen but I heard it was a bit of a dump and rough! I believe they only served beer, so a “cultured” drinker such as myself, didn’t have the palette for a brew.
Both had women’s and men’s entrances or ladies with escorts. No Gal would be caught going to the bar without a man on her arm back in the day- I dare say.
However, I remember once in Peterborough in the 60’s, my Dad went into a bar for a cold beer on a hot July day as Mum and I shopped in a nearby store. This bar only allowed Men through its doors!
Can you imagine? A “men only” bar. God only knows what hi-jinks happened in the dusky, dank darkness!
Come to think of it, back in Toronto I was in many “men only” bars.
Only in the 80’s- like today, they were called Gay Bars. Oh, the occasional straight woman would come with a Gay friend and sometimes a Lesbian or two- but that was about it. Mostly Men!
Now, like The Second, I had never been inside the Atherley Arms.
What an Angel I am!
The second was torn down years ago. Now a fire station has proudly taken it corner location.
So, Mum and the Supertest Gals would brace themselves for the onslaught of men, drunks and the “loose women” who accompanied them. I believe they ran a tight ship and had some Male help that ushered the “tight and tanked up” back out the door.
Oh yes, Supertest was “All Canadian” and its main function was to sell gasoline to the populace- even the drunks. Supertest was the name of the oil company. The Supertest Grill was just a sideline. Gas and a burger. Or was it the burger- then gas! Depends on how many onions Mum and the Supertest gals piled on top of the cheese I suppose.
If you want to see a Supertest pump today, drive out number 12 from Orillia towards Coldwater. Just past the Marchmount turn, look to the right. There’ll you’ll see a couple of old Supertest Pumps sitting in front of a garage.
Don’t look for my Mum though; she’s somewhere nice telling “her” version of the stolen bike tale- one more time.
Miss you Mum.
See you soon.