Good Gosh I am tired!

We moved into our gorgeous Island Home a week ago and it has taken seven full, long, tiring days to get unpacked and add some homey touches. Done and Done.

Half of our garage is filled with cardboard. I suggested to "the Mister" we stash the boxes along the side of the house. He has a concern that the boxes may get wet. It hasn't rained in more than a week and our lovely new van has yet to see the garage interior! Who gives a rat's buttock if the cardboard gets wet- which it won't since there's only sunshine and mild temps for the next week.

I can't begin to tell you how much stuff we've unpacked. I thought I got rid of so much back in "old home" but there still is a mountain of stuff here, so I have started to put extra stuff in boxes and taking it to the storage room on the lower level of our house. I will have to purge again but there's no rush. I am tired of packing and unpacking and making room for stuff so out of sight out of mind for now.

Remember we had thought we lost a bunch of stuff in the move to The Island? We have slowly discovered that our movers took it upon themselves to open a box or two and re-arrange our stuff. For instance, a box marked Master Bathroom had our Great Room mantle lamps tucked inside. Another had an antique Gone With The Wind lamp inside marked Master Bath. It was labelled correctly but it had been on  the bottom of three boxes piled in the corner of our Master Bedroom. It's been like an Easter Egg Hunt at times! More boxes were piled around the stack of three. I just couldn't remember where stuff was after four months of displacement.
Geesh!

We had been missing an oak dining room chair this past week until last night we found it in a garment box. It was wrapped in a movers quilt. Our leather jackets were rolled in bunches and tucked in on top. Why they opened our boxes and moved stuff around is beyond me.

A final tally would have me say that we had one antique lamp smashed. There was also a small Austrian vase found in several pieces near the bottom of a box. So, besides that- in the end, we faired quite well.

Today I am going to finish decorating our Great Room Christmas Tree then later this afternoon our friend Bev arrives at Nanaimo Airport- about 25 minutes away. She'll be house guest number two in the past week. "Victoria" Brenda stayed last weekend to help Tom and I unpack. We are really looking forward to Auntie B's visit. She's been in California at her sister's place since December first. She'll stay with us and tour the Island until mid-week.
Such fun!

On a final note, it appears you have had some wintery weather this past week back in good ole Ontari-ari-ari-oh! Our friends Deb and Warren report a foot of the white stuff about an hour and a bit north of Orillia.
Yikes!
We saw pics of snow covered, slippery roads.
Double Yikes!
So glad I don't have to drive on snowy roads. As our friend Brandy sent us a photo of slippery streets we were waiting in line at the car wash here in Duncan. The photo of flowers blooming in December was taken as her snow-covered pictures came into my phone....and yes this is still Canada with December flowers in bloom. 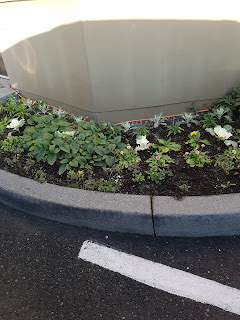 Now My Dears, that's you up to date.
Have a good weekend. Enjoy the Holidays which are almost upon us and even though I am not supposed to encourage Easterners to come West- it's an unwritten rule apparently, there's still room here on the Island.
All you'll leave behind is...winter!